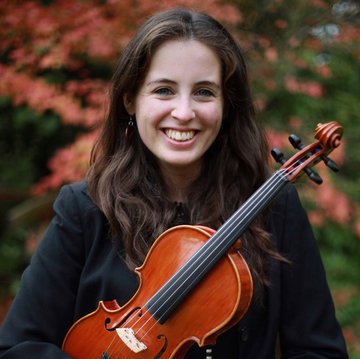 Hungarian-born Italian violinist, Flora is currently studying in London. She had performed in different venues in Italy and abroad.
3 of 3 photos
Violinist
London
Public liability insurance of £10 million

Hungarian-born Italian violinist Flora Fontanelli has won the first prize at the European Music Competition in Moncalieri, the third prize at the Giussano International Competition and the “Rancati Prize” at the Conservatorio “G. Verdi” in Milan. Following her Bachelor studies at the Conservatorio Giuseppe Verdi in Milan, where she graduated with the best mark with Christian Anzinger, and an Erasmus at the Universitaet Mozarteum Salzburg with Martin Mumelter, Flora is currently studying at the Royal College of Music, London for a Master of Performance with Jan Repko. As an orchestral performer, Flora has played in the Sinfonieorchester der Universitaet Mozarteum with Bruno Weil and in the Orchestra Sinfonica del Conservatorio di Milano with conductors as Tito Ceccherini and Corrado Rovaris. She has had the opportunity to work with baroque ensembles, performing as part of the “Aura Musicale” with Balàzs Màtè, in Budapest, Innsbruck, Kuffstein and Hall in Tirol, and the “Harmonious Society of Tickle-Fiddle Gentlemen” at Canterbury Cathedral.

"It was so pleasant and nice to have had Flora playing for us during our wedding. She played together with a harpist and they chose the best music for our drinks before dinner. I strongly recommend her!" Confermo parrecipazione ....ottima professionalità....ottima musicalità....ottimo risultato

“ It was really a special day, made even more special by Flora and her violin. She is also so available and her choice of works was perfect. I really recommend her.”

“we enjoyed a lot Flora’s playing. She created such a nice atmosphere and made our day even more special. She was so nice with us and available.”

“It was so lovely to have Flora playing at our wedding. I recommend her because she can create the right atmosphere with her violin. She also so flexible and available”.