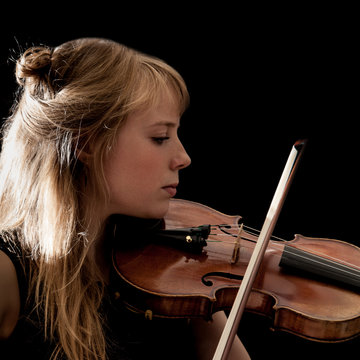 London based violinist Flora Curzon is best known for her musical versatility. Performing on both 'modern' and 'historical' violin set ups, she is a core member of the contemporary string group Project Instrumental and regularly works with Orchestra of the Age of Enlightenment, English String Orchestra, Armonico Consort and The Twisted Twenty. She is an experienced sight-reader and ensemble player, and is comfortable working with a click-track. Whilst her background is in classical music, her musical horizons are broad: she is well versed in many styles of folk music (including celtic, klezmer, Transylvanian and other styles of Eastern European Music, and has recently started to get into Swedish, Breton and Middle Eastern music too!), groove and improvisation, and has a keen interest in working with musicians from other cultures and with different art forms as a performer, improviser, recording artist and backing vocalist. She has experience working alongside dancers, storytellers, film and theatre, and enjoys bringing a plethora of styles and a willingness to respond and improvise to these situations. Her unique combination of interests and skills have sparked a fast growing and eclectic resumé of collaborations with artists and organisations including folk singer Sam Lee, Mercury Prize Winner Talvin Singh, acclaimed composer Jocelyn Pook, musical virtuoso Tcha Limberger, sitar player Sheema Mukherjee, She'koyekh, Jewish Music Institute, Jackdaws, Hejira, Meilyr Jones, Vivi Lachs, story teller Chris Salisbury, London Chamber Collective, London Sinfonietta, the Brodsky Quartet, Deafinitely Theatre, Bricolage and the Ceilidh Liberation Front. She also has her own projects which are available for performances, recording sessions and events: folk violin and cello duo, Fran and Flora, classical violin duo, Gaia Duo, and Tinker's Bubble Ceilidh Band. A graduate of the Royal Academy of Music where she was a member of the elite string ensemble (Royal Academy of Music Sainsbury Soloists), Flora studied modern violin with Maureen Smith and baroque violin with Elizabeth Wallfisch. She gained a top distinction and was awarded the DipRAM for an outstanding final recital in the summer of 2014. She has also studied extensively with Peter Hanson and Tcha Limberger, and has taken masterclasses with Maxim Vengerov, Ruth Watermann, David Dolan, Lars Ulrik Mortensen, Alan Bern, Ross Daly and Marcel Ramba. Flora also has a degree in Religion, Philosophy and Ethics from King's College London. Other info: She owns a DPA microphone and a Headway band pickup. She also owns a mini amp. She is an MU member and DBS checked