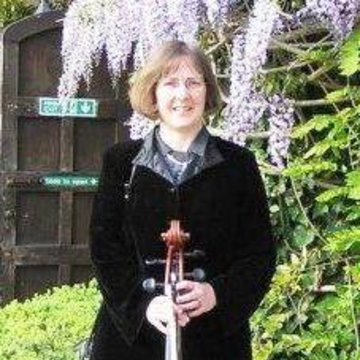 Fiona Hedges had a year’s piano scholarship at Chethams Hospital School of Music where she studied with Anthony Goldstone, and also a long-term East Riding County Scholarship to study cello with Anna Shuttleworth, professor at the Royal College of Music, under whose tutelage she took a cello diploma while an Oxford University music undergraduate (Lady Margaret Hall) and a cello performance finals recital. Since 1981 she has taught piano, cello, double bass, junior class music, theory, A level harmony and composition, class recorder & class cello, all at Rye St Antony School, Headington. From 1996-2016 she was also the visiting teacher of classical double bass (and piano) at Headington Prep School. Fiona joined the Cotswold Ensemble in 1990 as a cellist, and she has managed it since 2008. She plays cello with the Harcourt Ensemble in chamber music concerts, leads the cellos when she plays with Oxford Sinfonia and other local semi-pro orchestras, accompanies Cumnor Choral Society in their rehearsals, and she continues her busy home-teaching and exam accompanying practice based in West Oxford.

Perfect in every way, thank you Fiona

I can't thank you enough for the hard work you put into my wedding to make sure it was truly beautiful. The music was stunning and you made sure you played all our favourite songs. Everything tied together perfectly and I can't thank you enough. .... I hope to work with you in the future. Many thanks, K&D xx

Hi Fiona, Just to say how much we enjoyed your music on Saturday. Many guests remarked on how well it rounded off the celebration despite the weather. If you are playing at a public event in the area please let me know. It would be lovely to listen to the ensemble again.

I just wanted to quickly send you a massive thank you for Friday. Lots of people have been coming up to me to say how wonderful it was to have a quartet play throughout the meal, and we’ve even discovered that someone plays the Cello! She actually said you are the best Quartet that she has seen!

From Guides for Brides: Fiona was so helpful in the whole process of booking the Cotswold Ensemble. She sent us play lists and helped pick out the right music for parts of our day. They have a beautiful rich sound which made our day and had every guest telling us how wonderful the quartet was. They are a touch of class, well presented and wonderfully played with a huge repertoire of classical and modern music. Thank you for helping us have our perfect day