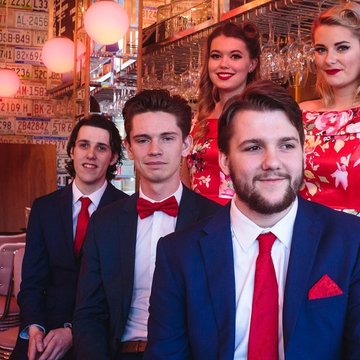 Fee Fee & the Sentiments are a function band formed in Manchester driven by their love for vintage rock ’n’ roll and pop music.
Singer
Manchester
Public liability insurance of £10 million

Fee Fee & the Sentiments are a function band formed in Manchester driven by their love for vintage rock ’n’ roll and pop music. They set out to bring a fresh outlook to the live function scene not only musically but visually. Since the band formed, they have been exceptionally busy from the outset playing many weddings, charity events, New Year’s Eve parties and even village fetes from Manchester, Leicestershire, North Wales and even all the way to Northumberland. The band burst onto the scene with their debut show reel in June 2017 which showcased just a snippet of their large repertoire with such artists as Paloma Faith, Elle King, Etta James, Elvis Presley and Jerry Lee Lewis to name but a few. Fee Fee & the Sentiments are always guaranteed to get the crowd dancing and will make your event one to remember!

Fee Fee and the Sentiments played at our wedding yesterday and I felt compelled to leave a review straight away. They were wonderful from the moment we booked them. From their communication with us to the incredible sets that they played. They have a unique and wonderful sound and had everyone up and dancing. Thank you so much. Lucy and Iain.