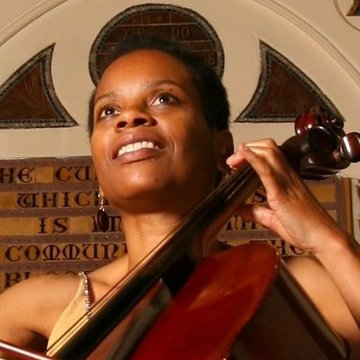 I believe performing is like Soul-searching. Trying to 'reach' the audience is a constant mission.
3 of 4 photos
Cellist
Southsea
Public liability insurance of £10 million

Since receiving her Performance Diploma in 'Cello from the Guildhall School, Faye has appeared as soloist at St John Smith Square, Portsmouth Cathedral and other venues around the South. A Leverhulme two year Studentship to Budapest's Liszt Academy enabled her to research in Contemporary Hungarian Cello music with the composer, Istvan Lang. This whetted her appetite for further exploration of the cello's versatility. As an extension of her mission, she premiered Andrew McBurnie's Breaking of the Day for 'Cello and Organ at Southwark Cathedral in 1996. She was honoured to share a platform with Opera Singers, Anne Fridal and Marvin Smith for a Gala Concert at London's Westminister in 2013. Faye embraces and has recorded other music styles as well as featuring in Raf Robertson's 2002 Calypso-Jazz Album. Subsequently, she accepted engagements at The Music Academy in Nicosia and The Queen's Hall in Trinidad with virtuoso Pianist Enrique Ali, In 2014, Faye was invited to perform in Fair Isle and the following year by request, she composed some pieces for an Evening of Meditative Style Music for 'Cello and Piano at John Pounds Church. In 2016, she performed again for a Celebration Service at the latter venue in Old Portsmouth. As a cello instructor, her time is divided by a weekly commute to teach at Rikkyo School in Horsham and Westhill Park School where she was with the Music department for two years.

Verified
Pete B, 4 years ago

Our client was over the moon with your playing Faye. Many thanks!

This Faye Clinton did with grace, producing some extraordinary tonal effects that impressed all those one spoke to in the interval. 'Bunraku' was indeed the highlight of the evening.

'In Sonata in A minor, op 36 Ist movement by (Edvard Grieg), the opening phrases of the cello were particularly moving. The interplay of the two musicians was excellent here, sensitive and closely woven, truly a musical 'conversation'.

Adding glamour and 'cello mastery to the evening was a virtuoso performance from Faye Clinton who held the audience spellbound with Popper's Hungarian Rhapsody.