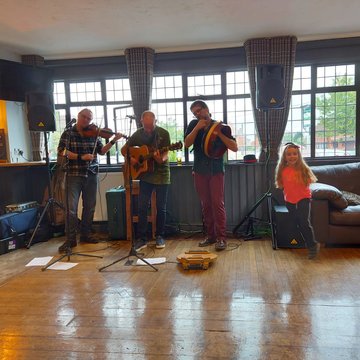 Four piece trad irish band performing around Hampshire. Have a peak at our website for info etc. www.fatherjackcelticband.co.uk

A foot stomping, fun, join-inable Trad Irish Group with Jigs, Reels & Songs to make the evening go with some fun. We hand out sheets with the chorus to our songs to encourage people to join in.

A FANTASTIC afternoon/evening at The Golden Eagle with Father Jack. The Guiness flowed along with the songs, tunes & dancing which made for a brilliant St. Patrick's Party.

Well last night we was at The Crofton Pub, great venue for some live music loads of space to set up your gear etc and lots of fine ales to sample and boy where they good. Anyway were not here to talk about ales but music! The band playing was called Father Jack, I believe to be in relation with Father Ted the program. The music was fantastic, it was Celtic and very lively, they had, guitar, drums and violin/Banjo/12 string ukelele. As we said the music was lively and very entertaining, in between them singing they would play some instrumental numbers. The instrumental numbers where great as they would get faster and faster and get the crowd going. The crowd where thoroughly enjoying themselves. When we got to our table one of the guys was handing out I guess karaoke handouts, these had the chorus to the some of the songs they where singing, I’ve never seen this before but it has to be a brilliant idea, as the evening went on and the beer was flowing, more and more people joined in with singing in the chorus of the songs. It would seem everyone had a great evening with Father Jack, I would definitely recommend them and if you see them advertised go a long and have a sing-a-long with them, you wont regret it!