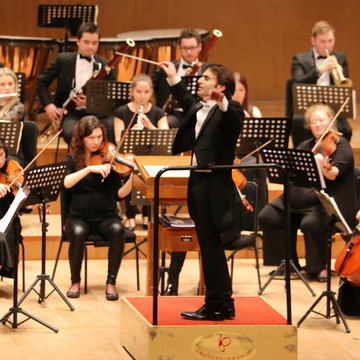 I am a pianist, conductor and composer. Currently the music director and principal conductor of the London Arte Chamber Orchestra in London
3 of 14 photos
Conductor
Beckenham

I am a pianist, conductor and composer, born and studied in Argentina in Rosario U.N.R Music College obtaining a bachelor's degree in piano and composition and in Buenos Aires, orchestral and choir conducting, moving to New York in 1999, to continue my studies in conducting and composition. I studied with Denise Ham and Robert Schwartz. I currently teach in London and work on a very vast repertoire from different ages and styles of music, from baroque music to contemporary music including jazz and tango with the ensemble'Tango Nuevo'- and choral music with the London Arte Chamber Orchestra and with the ensemble 'O'ton' based in Stuttgart (Germany). I am currently the Music Director and Conductor of London Arte Chamber Orchestra. I have been invited to collaborate as a guest conductor with several orchestras in Europe, America and Asia, As a composer and alongside my conducting career, I have composed music for the West End in London and several film scores for United States and Europe. Collaborations also include working with the BBC London, Sky Atlantic, Disney UK and most recently in 2017 with Pulse Films. I also have been invited by the Malta Embassy as the Music Director for the celebration of the Independence of Malta 2016 in London, in conjunction with the Malta embassy. With the London Arte Chamber Orchestra I had comprehensive tour to China during 2014/15 and 2017. Further tours will include a new tour to China, Poland and Germany in 2018 with Laco and 'O'ton' ensemble with chamber music concerts in Stuttgart, Germany.

Brachetta's Elephant Man score is atmospheric and adds notes of poignancy to some of Merrick’s more heart-wrenching scenes” (Bernard Pomerance’s The elephant man).

A fantastic night of moving and challenging music. The orchestra shows a fantastic balance and understanding of the classic repertoire. Anahit Chaushyan was superb performing Mozart’s Piano Concerto 27 with London Arte Chamber Orchestra

Brachetta showed great character performing Dvorak and his own Mass for Soprano and Orchestra S.Pucci