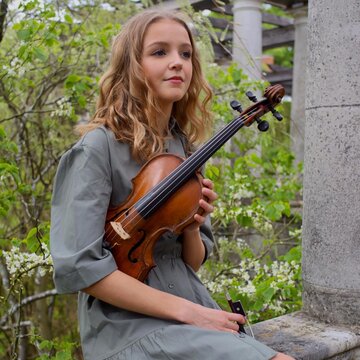 Evie Rogers was born in London and began playing the violin at age 5. Evie won a scholarship to The Purcell School for young musicians aged 10. She also won places to all London conservatories and is currently at The Guildhall School of Music and Drama studying with Boris Kucharsky where she is a scholarship holder. She has played at many prestigious venues including The Wigmore Hall, Royal Festival Hall and The BBC proms. She has been involved in a recording of Holst’s ‘The Planets’ with Chandos Records and performed on BBC Radio 3’s ‘In Tune.’ Evie was a member of The National Youth Orchestra and is an active member of many orchestras and chamber groups. She has won many competitions as a soloist and was invited by The Windsor and Maidenhead Symphony Orchestra to perform a concert at Norden Farm Arts Centre. As well as classical music Evie enjoys playing a variety of repertoire including Musical Theatre, Opera, POP and Jazz.

Evie's performance was absolutely wonderful!! She is a very talented young lady and a delight to listen to. I would highly recommend her! Thank you Evie for a wonderful performance!!

Cannot recommend Evie enough! Not only is she a fantastic musician, but her punctuality, friendliness and flexibility made her an absolute joy to work with from start to finish. A phenomenal violinist who plays with such a beautiful sound and a total professional.

Congratulations on an excellent recital. As a violinist myself, I was very impressed indeed with the dexterity and musicality with which Evie played the incredibly difficult Ravel pieces, especially the Tzigane. Anyway, I hope that she enjoyed the experience at least half as much as the audience did.