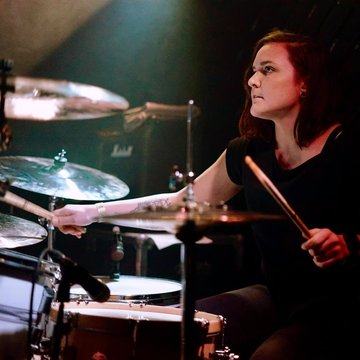 I am a female drummer who has been drumming for over 15 years with loads of recording and live performance experience!
3 of 3 photos
Drummer
London

I grew up in New Zealand and began drumming when I was 12. I decided to learn Scottish drumming which allowed me to learn the basics, including reading music, rhythms and sticking techniques to which I would practice on my practice pad everyday, before I had even touched a drum kit. At the same time I was also having guitar lessons, which helped me with timing and feel. When I was 15 I joined a big jazz band as the drummer/percussionist. During this time I learnt to read scores accurately and learnt to play in a big band with a conductor. We played concerts at schools, ceremonies as well as performing at the KBB music festival (competition for orchestras and jazz bands in New Zealand). I continued to perform as a part of the jazz band for another three years. During this time I was a part of an orchestra where I learnt to play tuned percussion (timpani), which was very different to what I was used to but allowed me to improve on my score reading ability. When I was 16 I was a part of the orchestra, playing the drum kit in the shows Wizard of Oz and Singin’ in the Rain. At the age of 18 I moved to Australia and went on to play in a blues/rock band with an artist called Olivia Ruth where we played mainly outside venues, playing both covers and originals. At the same time, I was drumming with a more chilled, reggae style artist called Harry Kemp, where I had the opportunity to explore with brushes and used the kit more expressively and yet again performing at different venues across Queensland, Australia. I then had the opportunity to create drum parts for indie/ blues artist Jesse Taylor, we’d go into the studio and record on his EP and also travel around Queensland, Australia for his EP release tour. One track from this EP, ‘I Found My Way’ has been used for in various radio, TV and film including the Hollywood film ‘What They Had.’ In 2015 I decided I wanted to further my music career and opportunities and moved to London. When I arrived I kept myself busy in two bands- Sacrifice and Bliss and The Ultra, both electronic/alternative style music. This is where I began gigging in London and had to opportunity to play at the o2 Academy, Islington. Present: In 2019 I expanded my session drumming career and played for a few different bands and artists including My Fiasco, Broken Bones Matilda and Eleni Drake, playing at venues across London- headlining as well as support, to name a few- The Dome, Camden Assembly, Hoxton Underbelly, The Social and the O2 academy Islington. I have also had the opportunity to play at UK festivals Y Not, Farmfest and CarFest this year with both bands, My Fiasco and Broken Bones Matilda. I am now also endorsed by Istanbul Mehmet Cymbals and Natal Drums! I am always looking for different artists to perform with, expand my drumming ability as well as support and collaborate with.

Erin is an exceptional drummer, she is extremely dedicated, hardworking and a lovely relaxed person to work with. She worked hard on learning all her parts before the practice and is generally just a great person to have around. Highly recommend!!

Working with Erin has been an absolute dream. She's always super supportive and helpful during practices or setting up before any gig. She's incredibly easy to get along with, which makes performing with her very enjoyable. Erin plays so effortlessly, with such charisma as well. I couldn't have asked for a better person to help with my project, and I couldn't recommend her highly enough to other musicians or for someone in need of a session drummer.