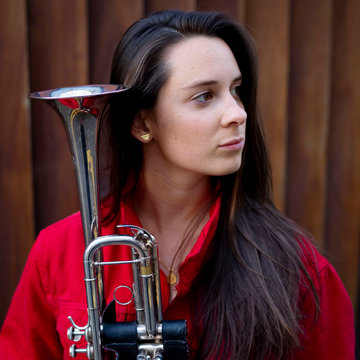 Erika Curbelo is a trumpet player based in London who works regularly with the top UK orchestras such as the London Philharmonic Orchestra, the Philharmonia Orchestra - who she has recently been on trial with - and London Sinfonietta to name but a few. Erika graduated with First Degree Honours from the Royal College of Music, voted the top institution for performing arts in Europe and second in the world for three consecutive years. She completed her Undergraduate Degree there, and was then selected to complete the Fast-Track Masters degree which she also graduated from with Distinction. During her time there, she won every single one of the competitive fellowships awarded each year – these included the Chamber Orchestra of Europe, the English National Opera, the London Philharmonic Orchestra, Philharmonia Orchestra and BBC Symphony Orchestra fellowships. She has worked regularly with most of these orchestras since. She was also awarded the much sought-after Arts and Humanities Research Council Award in 2018. Erika made her soloist debut in November 2018 at the Royal Festival Hall during a pre-concert recital for the Philharmonia Orchestra. Since then she has been invited to perform as a soloist at the V&A Museum in London, the Klösters Christmas Festival in Switzerland, and performed concertos with the Orquesta Filarmónica de Gran Canaria, Worthing Philharmonic and Southbank Sinfonia, where she held a seat for the year 2018 – 2019. Erika also works as an actor-musician – her most recent job being Virgin Media's newest advert with Usain Bolt.

4.9 out of 5
3 verified reviews
Satisfaction

MB
Mike B
4 years ago

Erika gave a fantastic performance and was very professional.

Very pleased with the event

Everything was fine and Erika played very well at two churches services. Many thanks.