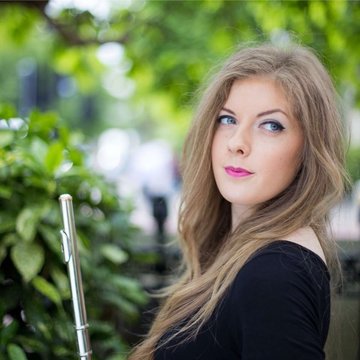 Epsie is a flute student at the Royal Academy of Music and is interested in work in London.
Flautist
London

Epsie Thompson is a flautist from Llanelli in South Wales. She is currently a Postgraduate student at the Royal Academy of Music studying with Sam Coles and June Scott. She began learning the flute aged seven, at her local primary school. At aged fourteen, she was accepted into Chetham’s School of Music to study with Linda Verrier. She then continued on to study at the Royal Academy of Music. Over the years, Epsie has had a great many competition successes. This year, she was successful in winning the Prestigious Bryn Terfel Scholarship, a televised arts competition in Wales. In July, she won the International Young Musician of the Year under age thirty at the Llangollen Eisteddfod. She had a further success in June, winning the instrumental solo under twenty-five competition at the Urdd National Eisteddfod. Epsie has been members and principal flute of both the National Youth Orchestra of Great Britain and the National Youth Orchestra of Wales. She thoroughly enjoyed her time with the orchestras as it give her the opportunity to perform at the BBC Proms and venues such as the Royal Festival Hall, The Barbican Centre, Symphony Hall, Birmingham and St David’s Hall, Cardiff with conductors such as Vasily Petrenko, Vladimir Jurowski, John Wilson and Edward Gardner. Epsie also has a very keen interest in chamber music and was one of the founding members of the Abingdon Quintet and the experiential music group ‘4|12 Collective’. As a member of the Abingdon Quintet she has had the opportunity to perform in venues across the UK, including at the Wigmore Hall. In 2016, the quintet were invited to take up a summer residency in France and play a series of concerts. In the future, Epsie aspires to be an orchestral flautist but also continue her solo and chamber playing.