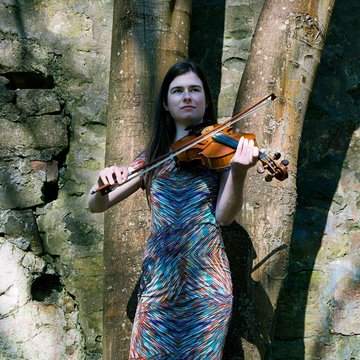 Emma is a versatile and skilled musician whose style is rooted in folk but has played rock, blues, pop and even dance hits in nightclubs!
Fiddler
Saltcoats
Verified profile

Emma has been playing traditional music on the fiddle since the age of 11 and the clarsach (celtic harp) since the age of 14. Now 24, she is an accomplished musician with years of performance and teaching experience and a passion for music. During her teenage years, she was part of the North Ayrshire Traditional Music Group who performed in many venues including the Glasgow Royal Concert Hall and gigs in France, Spain, Sweden and Slovenia. She won the title of North Ayrshire Traditional Musician of the Year in 2007. Emma also attended the Royal Conservatoire of Scotland (formerly known as RSAMD), spending her Saturdays studying music at the Junior Academy. In 2010, she went on to study music further at Newcastle University, where she received a 2:1 Honours Degree specialising in folk and traditional music. Emma has plenty of performance experience, playing at many big venues including the Sage Gateshead, King Tuts in Glasgow and the Cavern Club, Liverpool. As part of her band, Speldosa, she has played at many folk festivals and folk clubs, including Sidmouth Folk Week and the Black Diamond Folk Club in Birmingham. Emma has also performed and delighted audiences in care homes, schools and at weddings. She also has a wealth of teaching experience, including teaching private lessons on the fiddle and clarsach. She is a regular workshop tutor at both the Cambridge and Sidmouth Folk Festivals. She has also helped teach songwriting workshops for young people and taught singing and fiddle workshops for a variety of ages and abilities in her home town of North Ayrshire.

Thank you very much for being our lovely musician during our wedding ceremony! Your beautiful music complemented our ceremony perfectly and everybody thought it was absolutely lovely.

So many people have commented on how much they enjoyed the music... I'm sure that people were dancing because they couldn't resist your fiddle playing. Also it was delightful to be able to talk between dances, yet also listen to and enjoy your harp playing. Your contribution to the success of our day is immeasurable. You are a delightful musician and charming too!