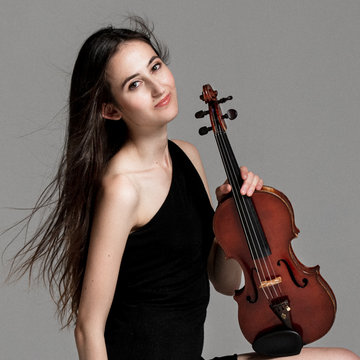 Italian violinist trained at the RCM in London. She won more than 20 competitions and performed in Italy and abroad in prestigious venues.
3 of 3 photos
Violinist
Londra
Public liability insurance of £10 million
Verified profile

22 year old Italian violinist Emma graduated with honors and honorable mention from the Como G. Verdi Conservatory. Currently studying at the Royal College of Music with Felix Andrievsky, she is a holder of the Henry Wood Trust Award. She has performed in Italy and abroad (France, Switzerland, Spain, Russia, Romania, Greece, UK). She has attended many masterclasses, including with Sergej Krylov, Zakhar Bron and Tchaikovsky Trio, and has performed in prestigious locations, including the Social Theatre in Como, Palazzo Albrizzi in Venice, Estense Hall in Varese, Ateneu hall in Bacau, as soloist with the Philarmonic Orchestra Mihail Jora, and Rachmaninov Hall of Moscow Tchaikovsky Conservatory. She has performed the Vivaldi Four Seasons as soloist with the Bruno Maderna Orchestra in Forlì, Italy. Emma has won several national and international competitions in Italy, as a soloist and in chamber ensembles, including one of the highest Italian prizes, the Rassegna Castrocaro Classica. At this competition she was also awarded the audience prize and she has recorded a CD.

Emma is a lovely Violinest

Emma and her harp accompanist were absolutely fantastic! No music requests were too much trouble, they arrived promptly and their playing completely made the ceremony. On behalf of all of my complimentary guests, thank you!!

Her fingers fly over the violin!Fantastic sound and quality of interpretation