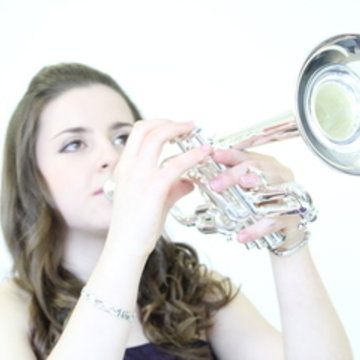 Emily Wilson is currently a professional musician, serving as Principal Cornet of British Army Band Tidworth, having graduated from the Royal College of Music as a Trumpet Scholar, with a First Class Honours Degree in Trumpet Performance in 2017. Having performed at many 'gigs' over the years, Emily is extremely experienced and aims to make your event run as smoothly as possible, making sure everything is sorted well in advance and trying to cater for as many of your requests as possible; please do ask if there is anything special I can do for you. Emily has a vast experience of playing in different style for different occasions including, but not limited to, Weddings, Funerals, Dinner nights bugle calls, guest soloist slots etc. She has performed as a Soloist with many different groups, playing solos in prestigious venues such as the Royal Albert Hall, Wells Cathedral, Gloucester Cathedral and Symphony Hall. She has played for many Orchestras all over the country, including the London Classical Soloists, Hastings Philharmonic and Ensemble Orquesta to name a few, and has a very wide knowledge of Orchestral Repertoire. Aged 16, she was awarded a music scholarship to study at Wells Cathedral School in Somerset on Cornet. Having had a very successful two years at Wells Cathedral School, completing her A Levels and the DipABRSM, Emily earned scholarships to study at the Royal College of Music, the Royal Academy of Music and the Royal Welsh College of Music. Since then, Emily has been the recipient of many awards such as the Keith Nutland Award and the Margaret Rose Bursary. She was also invited to perform a recital in Pitville Pump Rooms as part of the world renowned Cheltenham Music Festival.

I have always been complimented on my Trumpet/Cornet sound, and the cleanliness of my performances.

Royal Albert Hall, Symphony Hall, many Churches and concert venues up and down the country.

Hakan Hardenberger and Alison Balsom are two of my main influences.

Changing of the Guard at Buckingham Palace, or the Ceremony of the Keys at the Tower of London.

Please let me know as soon as possible if timings do change - I will be as flexible as I can.

This is not currently something I offer.

I can be ready in as little as 10 minutes.

Please do ask me if you would like a specific piece to be played at your event. If I do not already have/know the piece, then there might be an additional fee in order to obtain/transcribe the music.

Yes, I will provide all equipment that I need to perform.

Please do ask me if you would like a specific piece to be played at your event. If I do not already have/know the piece, then there might be an additional fee in order to obtain/transcribe the music.

Standard Prices
NEW!Virtual services
Zoom bomb
I'll jump into your Zoom call and surprise your friends and colleagues with a song!
£40
Trumpet Masterclass
Up to 1 hour trumpet masterclass delivered via zoom. Can be tailored to include specific things if applicable. To include question and answer session for the final 10/15 minutes.
£200
Emily

AJ
Andrew J
1 month ago, for a Concert in Evesham Rd

We have previously booked Emily to play Cornet for us and we were delighted that she was able to play for us again in Cheltenham. From the onset she communicated well and listened to our requirements, providing advice and guidance. We were really pleased with how professional and easy she was to work with. She did a great job and played some wonderful music to a very high standard.

Just a brief note to say thank you for your wonderful playing at my daughters Wedding, the music just made the whole thing. Your trumpet playing had a lovely tone and was a delightful addition to the ceremony. Many people have commented on how wonderful your playing was and how much texture it added.