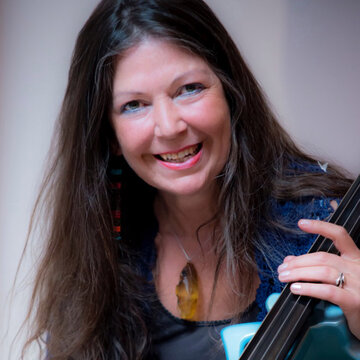 Emily Burridge is a virtuoso concert cellist, composer, arranger and producer. In November 2019 a reviewer wrote, “Emily Burridge lifts the subtle art of cello to new dimensions with her inspirational, moody, soulful and joyous musicianship.” Her skill of deftly improvising has expanded her career beyond the usual associations of the cello as a classical instrument and her composing skills while generally featuring the cello are also realised in a live setting through the adaptation of looping pedals. These enable her both in a solo and collaborative context to multi track the cello and create both dynamic and ‘sublime music which fluidly crosses genres’. “Fascinating and unique” – The Musician “Spellbinding innovative performance” – Nexus “Music that is deep, thoughtful and also lifts your spirits” – European Progressive Music She specialises in performing the Bach Suites and combines these with a series of compositions from her acclaimed album productions ‘Music from Out of the Blue’ in which she utilises the looping pedals. You can also enquire and discuss with Emily about classical repertoire which can be suitable with just solo cello for example 'The Swan' by Camille Saint Saens. Additionally for an extra fee to the performance Emily can write an arrangement of a favourite pop song or theme tune or a piece originally written for other instrumentation. .Emily's covers and arrangements include 'Chasing Cars' by Snow Patrol, (now released on i tunes& Spotify), 'Home' by Cinematic Orchestra, 'Speechless' by Michael Jackson,. Classical arrangements include Pavanne by Faure. The Flower duet (Lakme) and in summer ‘21 Her charting arrangement of Pachelbel’s “Canon” was produced to accompany a bride as she walked through gardens to her wedding. For these pieces Emily pre-recorded a multi tracked cello arrangement in her studio and in performance accompanies it as a backing track. She approaches her employment with utmost professionalism and will bring to a special occasion, wedding or corporate function style and charm with her original program of both classical and classical crossover ambient music. In addition if a client requests an arrangement of a pop song as part of the event’s music she can produce this with her own recording facility. She has her own PA for smaller venues and can set up within half an hour. She delights in performing and recognises the art of performance as an important role of being a musician. She entertains audiences alike in concert halls, churches, museums, intimate venues of UK rural touring, arboretums and parks, festivals and the ever increasingly popular house concerts. She currently has three productions which tour. Emily’s Solo Productions Through employing modern sampling and looping technology, Emily has developed exciting and innovative programs of new music for her solo cello programs “Bach & Music from Out of the Blue”, “From Bach to the Amazon” “Bach by Candlelight” and “Out of the Blue & Into the Amazon” INCANDESCENDO A dynamic composing and performing duo with Latin percussionist and guitarist Felix Gibbons. “A Musical Kaleidoscope of World, Classical, Folk and free Jazz influences” Duos for Pedal Steel Guitar & Cello Her long standing duo with the renowned pedal steel guitarist BJ Cole. Together they produce a dynamic energy that has evolved from their complementary musical perspectives. As a session musician :and arranger - Emily, the classically trained virtuoso ‘cellist with a talent for improvisation honed to spontaneous perfection by the demands of top flight session work in genres of music including; pop, rock, folk, Latin, dance music and classical. With more than twenty years of experience employed in recording studios, Emily is at home within the recording environment as she is on stage performing and has contributed to countless songs and soundtracks. As well as reading a notated part her perfect pitch enables her to identify chordal structures and establish a ‘cello part. She can write cello parts and string arrangements having previously been sent the song or she can improvise working alongside other musicians in a studio environment or work individually with a producer or songwriter

Yes including acoustic or amplified option.

If you have a favourite song that isn't included in my set list then please enquire and an arrangement can be created for you. Depending on the work involved this can be an extra fee ranging from £40.00 for a single line arrangement to £200.00 for a multi tracked prerecorded backing track .

Standard Prices
All prices include:PA supplied
NEW!Virtual services
Mellow Cello by candle light
I can stream live from a beautiful setting and provide an exceptional musical experience for any special occasion being celebrated on a virtual platform. Combining classical with contemporary through utilising sampling and looping technology, an exciting and innovative program of new music for the cello has evolved . As a virtuoso solo concert cellist I specialise in performing the "Unaccompanied suites for solo cello" by JS Bach. As a composer in performance I incorporate looping pedals to multi track the cello creating harmonies and rhythms performing music from my album releases. Review of album "Compositions & Meditations live in Chartres Cathedral" ‘Emily has developed an original program of new music by operating looping pedals with her feet to record harmonies and create multi-tracked cello compositions live). The result is a wonderfully mellow, atmospheric resonance……The extraordinary spiritual presence of Chartres is exquisitely captured here through Emily's cello.’ Review by Richard Giles JUNE – JULY 2018 NEXUS and in 2019 a reviewer wrote ‘Emily Burridge lifts the subtle art of cello to new dimensions with her inspirational, moody, soulful and joyous musicianship. This is cello to lift the spirit, harmonise with the emotions and take you on a journey’
£200

5 out of 5
10 verified reviews
Satisfaction

We booked Emily to play the cello during our Wedding Ceremony and Reception and she was absolutely phenomenal. From the first minute, Emily was so easily to communicate with and happy to be flexible and accommodate our plans. In our church ceremony, Emily played a beautiful version of a thousand dreams for the Bridal entry which was stunning and Emily later joined us for our drinks reception where she played a vast range of different pieces. Our guests have not stopped commenting on how beautiful her music was and we would certainly recommend Emily for any events!!

Emily was excellent in all departments. She was very helpful and the music she played for my daughter's wedding was just right for the occasion.

Absolutely amazing - she is delightful, enthusiastic, highly accomplished and really went out of her way to make sure that the performance was what we wanted - and it was! I would happily have listened to her play all over again.

Emily is very professional and we love how she performed her own music and it suited the ambience of our event so well!

Emily played at my sister's memorial service. She was very accommodating in working with the family to play my sister's favourite music. My sister had always loved the cello so it was very fitting for Emily to play at the service. She played beautifully which allowed us time to reflect on my sister's life. Thank you. 10/10 Annabelle Dexter

TB
Tanya B
3 years ago, for a Corporate event in St John’s Gate

It was a pleasure to work with Emily who performed at our charity’s 50th Anniversary event at the Museum of St John’s in London. Highly professional, she worked closely to our brief, and through her Amazon inspired collection, brought something truly unique and distinct to our important event.