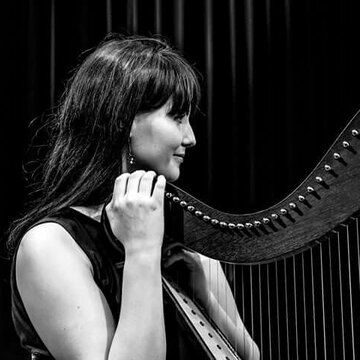 Emer is an Irish traditional harpist and pianist based in Dublin. She is available for gigs and tours both in Ireland and worldwide.
3 of 14 photos
Harpist
Berlin

Emer Toale is a professional traditional Irish harpist and harp teacher from Dublin. Having been learning tin whistle and piano for some years prior, Emer started learning harp when she was twelve, in her own Comhaltas Ceoltóirí Éireann branch of Seán Treacy in Dublin with Lindsay Moynagh. Emer progressed rapidly and took a keen interest in competition, and in 2006 she won her first Leinster Fleadh, qualifying her to the All-Ireland Fleadh (Fleadh Cheoil na hÉireann), which she has since done eight more times. In 2011 and 2012 Emer was awarded third place at the All-Ireland Fleadh as part of a duet with Dublin accordionist, Grace Dowling. Emer has also competed and won prizes in several other competitions, including Granard Harp Festival, Keadue Harp Festival and Nobber Harp Festival. Emer has completed all the exams with Comhaltas Ceoltóirí Éireann (Scrúdú Ceol Tíre, accredited by RIAM) in harp and has completed Grade 8 in classical piano, as well as receiving the gold medal in Advanced Piano Recital. In 2012 Emer was awarded the Royal Irish Academy of Music (RIAM) High Achiever’s Award for Advanced Piano Recital. She is also a qualified adjudicator at Fleadhanna Ceoil. Emer is an experienced performer. Her work has ranged from family parties and intimate weddings to corporate and state events. In 2012 Emer was invited to join some of Ireland’s best young traditional musicians on the Comhaltas Ceoltóirí Éireann Tour of Ireland. With her group, she subsequently toured Britain and America in 2013. She has most recently been involved in several different music projects in Berlin including Huas Celtic Music Collective, Elvena Harp & Fiddle Duo, The Silver Tassie Ceilidh Band and Larkin. Emer started teaching privately when she was just sixteen. At seventeen she started to teach with Comhaltas Ceoltóirí Éireann Craobh Seán Treacy, and has continued to teach there until she relocated to Berlin in 2016. Emer has also taught with Ceoltóirí Cluain Tarbh since 2014. Emer has experience teaching tin whistle, piano (classical and Irish traditional) and traditional orchestra (grúpa cheoil & banna céilí) as well as harp. Emer is a warm and patient teacher who takes each student’s ability, personality and personal preferences into account. Her students have been very successful in competition at county, provincial and All-Ireland level.

Seamus B, 5 years ago