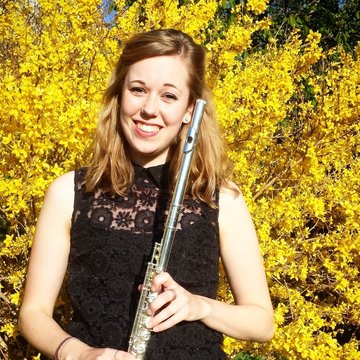 Eloise Kendall is a professional flutist working in Scandinavia and the UK. Having completed her Masters degree in Symphonic Orchestral Performance (flute & piccolo) at the Academy of Music and Drama in Gothenburg, Sweden with Håvard Lysebo and Tina Ljungqvist, both members of the Gothenburg Symphony Orchestra, she is now studying at the Norwegian Academy of Music in Oslo, with Tom Ottar Andreassen and Andrea Lieberknecht. During her time in Scandinavia Eloise has been regularly freelancing with professional orchestras including the Gothenburg Symphony Orchestra, Gothenburg Opera and Jönköping Sinfonietta, and in the UK with the City of Birmingham Symphony Orchestra (CBSO) and the Orchestra of the Swan. In 2017, Eloise was awarded 1st prize in the Swedish National Orchestra Academy concerto competition, and was invited to perform Malcolm Arnold’s Concerto for Flute & Strings with the University of Gothenburg Symphony Orchestra. Previously, Eloise studied music for three years at the University of Birmingham majoring in performance on flute with Diane Clark. As a committed orchestral musician Eloise was a member of the CBSO Youth Orchestra for two years, performing concerts in Symphony Hall, Birmingham, and was principal flute in the University of Birmingham’s Philharmonic Orchestra as well as enjoying the opportunity to perform concertos with the university orchestra. Previously, Eloise reached the final 12 at the Bromsgrove International Young Musicians’ Competition in 2014, and received the first prize for the Music at Beaulieu Awards in 2015, awarded by Stephen Cleobury. As a pianist, Eloise has worked under Julian Wilkins (CBSO) as accompanist to the University Choir in Birmingham, as well as accompanying the University of Birmingham Chamber Choirs and Cantata, rehearsing a wide range of choral works.

Eloise was very convincing as soloist. She showed technical brilliance, musicality and played with a stunningly beautiful sound.

Eloise’s performance was so perfect, that we did not have to argue about who won the competition…she dared to play with a very fine dynamic and managed to sound beautiful both in the slow and in the virtuoso passages