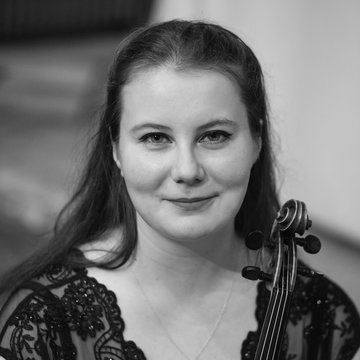 Check availability and get a free quote now - no commitment to book
From£180
About Elizabeth
Reviews
Home page
Elizabeth Nurse
Like Elizabeth?

Elizabeth is a versatile classical singer and violinist based near Oxford. She enjoys a variety of musical ventures and performs music from the 14th to the 21st centuries. Her portfolio also includes teaching for the Bucks Music Trust and working as a Creative Leader with the Music Mind Spirit Trust. Elizabeth is a talented singer, and enjoys choral and consort singing as well as singing as a soloist, whether in opera, oratorio or recital work. She is a Lay Clerk with the Christ Church Cathedral Choir (the first woman to be appointed). She sings regularly with Untune the Sky, an Oxford-based mixed-instrumental ensemble specialising in soloistic ensemble performance. She performed Vivaldi's Stabat Mater as part of the Oxford Lent Concerts in 2017, and sang solos in the Wycombe Student Music performance of Mendelssohn’s ‘Elijah’ in August 2016. Her operatic debut was as 'Female Chorus' (narrator) in the St Peter's Opera Company performance of Britten's 'The Rape of Lucretia'. She won the Roy Harvey Memorial Cup for Opera and Oratorio at the Oxford Music Festival 2020, where she was awarded the highest marks in the singing classes. As a violinist, Elizabeth is experienced as a soloist, concertmaster, and chamber musician. She won the Oxford University Philharmonia Concerto Competition and performed the Dvorak Violin Concerto in the Sheldonian in February 2019. She appears on the Queen’s Choir disc ‘House of the Mind’ as the violinist in Nico Muhly’s ‘Like as the Hart’. Recent performances have included playing Piazzolla's Four Seasons with Oxford Alternative Orchestra in the Holywell Music Room, performing the Saint-Saens Fantasie for Violin and Harp with Anneke Hodnett, performed J.S. Bach's E Major Violin Concerto with the Ripieno Players (formerly of Oxford). She performed the solo violin part in Mozart’s Sinfonia Concertante in E flat Major K. 364 with the London Mozart Players in 2014, and in the same year won the Orchestral Instrument Award at the Oxford Music Festival. She has participated in masterclasses for Pinchas Zukerman, Natalie Clein and Maxim Vengerov. She regularly gives recitals in Oxford.

TO
The R
6 years ago

They opened with J.S. Bach’s Violin Concerto in E Major, featuring the leader of the Oxford University Orchestra, Elizabeth Nurse, as soloist. Nurse played with confident aplomb throughout, showing both the authority of the formidable concertmaster she is and the independent spirit of a soloist.