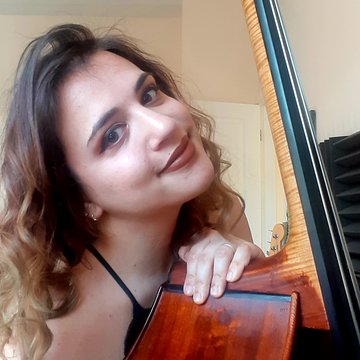 Elena Mazzer is an Italian Double Bass player currently based in Manchester (UK). Elena began playing the bass at the age of 10 with Mauro Muraro at Veneto Suzuki School in her hometown Treviso. She played as principal bass for 10 years (2006-2016) in the youth orchestra GAV Giovani Archi Veneti in many concerts in Italy and abroad (most important : Teatro Dal Verme in Milan, 2007, University for Music and performing Arts Auditorium in Mannheim, Germany, 2008, San Nicola in Carcere Church, Rome in 2009, Chinonais Collégiale de Candes Saint-Martin, 2010 and Evry Cathèdrale with clarinetist Michel Portal, 2012). In 2011 Elena enrolled at the Music Conservatory F. Venezze in Rovigo (Italy) for her Bachelors and Masters degree in Double Bass under the tutelage of Ubaldo Fioravanti. She had the chance to collaborate with Gaga Symphony Orchestra, symphonic orchestra that plays a very original repertoire, and to play live in quintet “A cuore aperto” by Paolo Zambelli, soundtrack of a ballet with an actress’ monologue based on Shakespeare’s sonnets, in Rovigo, Padova, Pisa, Spoleto, Montecchio, Verona and Rome. In 2016 she played Mahler 5th Symphony conducted by Semyon Bychkov in Musikverein, one of the most famous concert hall, during her Erasmus semester at MDW (University of Music and Performing Arts) in Vienna. Three years ago Elena moved to Manchester to start a new life experience, having the chance to continue her music studies with Jiří Hudec in Royal Northern College of Music. She graduated with a Postgraduate Diploma in May 2018 and continued perfecting her musical and technical skills in solo and orchestral repertoire for one more year through a CPD course. Studying in this prestigious music college Elena had the opportunity to perform masterpieces like Mussorgsky Pictures at an Exhibition, Stravinsky Rite of Spring, Berlioz Symphonie Fantastique, Elgar Enigma Variations, Bartok Concerto for Orchestra and Shostakovich 5th Symphony conducted by Elim Chan, En Shao, Clark Rundell, Markus Stenz, Mark Heron and Roland Bӧer in important venues such as Cadogan Hall in London and Conservatoire national supérieur d'art dramatique in Paris. Moreover, she had the chance to perform in different college ensembles for masterclasses, contemporary and ancient music concerts, occasionally supervised by members of the Academy of St Martin in the Fields and the Chamber Orchestra of Europe. Elena also took part in the PES scheme, playing alongside with members of BBC Philarmonic.

Elena played beautifully and the choice of repertoire was really interesting. Definitely recommend!