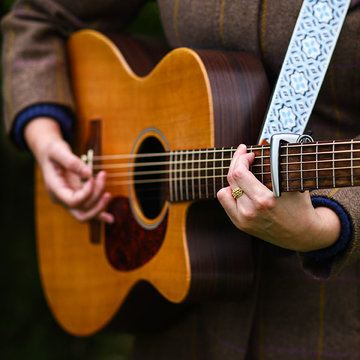 Sardinian-born Elena inherited her father’s love of singing, particularly folk music, from a very early age, singing in church choirs and even appearing on Italian TV. By her teens, Elena was an experienced artist performing for large audiences and was singing and playing guitar professionally. Since moving to the UK at the age of 18, Elena has lived in London where she co-founded and toured with the successful London Bulgarian choir.  In 2006 she moved to Scotland where her work at the Royal Scottish Academy of Art gave her the opportunity to become fully immersed in the local music scene. She has won many awards during her career such as the Girvan Folk Festival Open Stage Competition in 2009 and the Margot Campbell Trophy at the Royal National Mòd in 2012. Following the success of her 2010 debut album, "Journey", she toured the UK where she became a popular personality at festivals  such as the Edinburgh Fringe. More recently she has performed  at Bing-anee Festival in Pitlochry and the Kinross-shire Music Festival and in 2019 she had the privilege to play live on Radio BBC Oxford, with radio host Dave Gilyeat.

"The first-rate bill I witnessed was utterly inspiring and professional yet comfortably informal, from start to finish. A musical, cultural and all-round educational event." Amy Flynn, University of Leeds, 2015

Yes. I am definitely happy to chat through and make sure we find what works for your event.

It would easier for me if there was a PA system in place beforehand. Dependent on distance I can bring my own equipment.

This depends on how long I have to learn the pieces. There is a fee of £30 for this service to take into account rehearsal times etc.

Standard Prices
All prices include:PA equipment (if required) and consultation

“Journey is an eclectic collection of folk songs from different countries including Scotland, Sardinia, Bulgaria and Ireland … [Elena’s] Gaelic is very convincing, moreover it’s pitch perfect, rhythmic and emotive. It sounds like a blue print for how Gaelic should always be sung.” Angela Sutherland, Shetland Times, 12th April 2013

With hints of Joni Mitchell and allusions to Shepherd sighs, Elena successfully drew together these unrelated musical connotations in a refreshingly organic, personal one-hour set, which constituted the second part of the evening. … The first-rate bill I witnessed was utterly inspiring and professional yet comfortably informal, from start to finish. A musical, cultural and all-round educational evening and a credible publicity for why everybody should visit Sardinia – if this taster were anything to go by.

The purity of her vocal was greeted with strong applause and Piras had the audience clapping and singing along through her set.

The talented Piras had the onerous task of warming up the crowd, but her deeply impressive voice was enough to grab hold of – and keep – their attention.

Elena […] thrilled the crowd with a handful of honest, tender songs. […] Her songs capture listeners immediately and it was a special moment when she performed.

Her Gaelic is very convincing, moverover it’s pitch perfect, rhythmic and emotive. It sounds like a blue print for how Gaelic should always be sung.

In a stunning achievement assisted by three short courses in Gaelic at Sabhal Mor Ostaig, the inspirational Gaelic college on the shores of the Sound of Sleat in Skye, a Sardinian-born singer, Elena Piras has won the Margot Campbell Trophy at the 2012 Royal National Mod in Dunoon after one year learning the language.

A Pitlochry singer travelled to Dunoon by public transport on her own and won the Margot Campbell Trophy at the Royal National Mòd. Elena Piras’ story is one of remarkable courage – she is blind.

Blind since birth, Elena Piras is a 29-year old opera, jazz and folk singer from Sasseri in Sardinia who moved to England aged 18, she went on to work at the Royal Scottish Academy of Art in Edinburgh, where she now lives.

Blind singer masters language to triumph at the Mod.

The Sardinian-born singer studied determinedly for 12 months to overcome her blindness to learn Gaelic to the high standard essential to qualify just to take part in the prestigious competition.