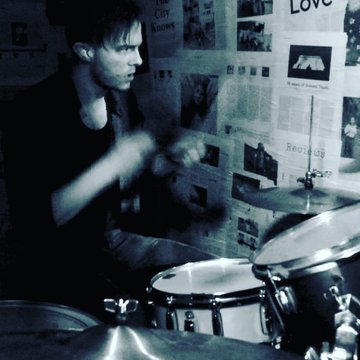 Check availability and get a free quote now - no commitment to book
Watch & Listen
About Ed
Questions (4)
Reviews
Home page
Ed James Jordan
Like Ed?
Watch & Listen
1-3 of 4 videos
Hugo Valentine - All I Want (Live from Rehearsal)
Rock with You (Drum Cam)
Eyes On Me - Rebecca Riedtmann (DRUM CAM)

Ed is a Freelance Drummer and Tutor based in North Hampshire and is available for recording work, musicals, and live performance

Ed started drumming in 2008 and was playing in a band before he had ever received a drum lesson. Later that year Ed began studying privately with local tutor Tom Vincent (Traffic Experiment) of whom Ed studied with for 5 years. During these 5 years, Ed also earned his Grade 5,6 and 8 in Drums through Rock School. Ed has also studied at The Academy of Contemporary Music (ACM) in Guildford, on their part-time courses. While Ed attended school, he played in the schools Big Band, Flute Band, Orchestra, Glee Club Band and performed in many of the schools musical productions. In doing this he won the “Dedication to Music” award in 2010. After completing his GCSE’s, Ed then went on to study at ACM full-time to obtain a Diploma (Distinction) and the following year a Higher Diploma (Merit). Ed currently holds a Degree (BMus Hons) in music performance, awarded by ACM and Middlesex University. During his studies, Ed was lucky enough to study under Pete Riley (Guthrie Govan, Republica), Joe Yoshida (Bob Blakeley, Katie Melua), Frank Tontoh (Amy Winehouse, Gary Barlow) and Toby Drummond (We Will Rock You, Legally Blonde, Wicked). Ed plays in some local bands including one of Surreys “Premium” function bands, The Thatchers, who have been dubbed “Surrey’s most stylish Mumford & Sons folk style wedding covers band”. Ed also previously played in a originals band, Elias Martell, who were award winning (BMA for the Best Acoustic band 2016) and headlined the rustic stage at Weyfest (2015). Ed is also a busy session musician working with many solo artists including Andrea Ojano and Rebecca Reditman. Ed, up until recently, had been performing with Brighton Based Alt Folk/Rock band, Noble Jacks. Whilst on tour, he was able to play in many types of venues from Theatres to o2 Academy’s, and was lucky enough to support such acts as The Eskies, Maddog McRae and CoCo & The Butterfields. Ed is also a regular performer with The Go Go Five which yield a collection of some of the country’s finest session musicians.

That's not a problem! Just get in touch with me and we will do what we can to adjust accordingly.

Ideally, 45 minutes but, I can rush through in 30 minutes.

Yes, I can even bring my own microphones for my kit unless you'd rather use your own or they are provided.

Steve B, 3 years ago

Being a session drummer of 25 years and owner of a studio. When a drummer comes in to record you can spot them a mile away. Generally it is either time keeping issues, lack of groove or invariably over playing. When Elias Martell came in to record last week I had the pleasure of producing 6 tracks, And the added pleasure of working with Ed Jordan. Don’t be fooled by his age, Ed plays with the maturity and charisma of a seasoned pro. Great feel, spot on time keeping, originality and a really nice chap as well. I can thoroughly recommend him as a drummer and as a musician.

Ed was an absolute dream to work with. Always on time, well rehearsed, well presented, with a natural feel and flare that surpassed his years and, at that time , his experience. He’s got an awesome groove that can hold the rest of the band together like glue. His creative input was also on point when requested. I have no doubt Ed will be a huge success and he is an asset to anyone looking for a steady, contemporary drummer. I look back on our time playing together with great fondness and hope that we will work together again in the future