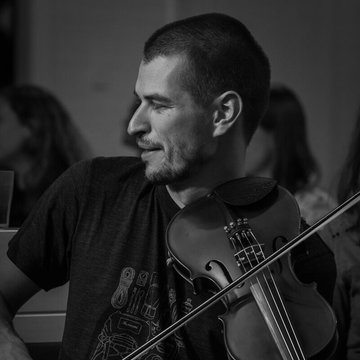 Music should be fun, for both the player, and for the listener.

My core principle is that music should be fun, for both the player, and for the listener. In order to do this, I have to understand the needs of my audience and tailor my music accordingly, whilst at the same time pushing the boundaries (and myself) to be the most innovative I can be. I grew up with the bothy ballads from North East Scotland, and although was only in Aberdeenshire for the first five years of my life (long enough to make me an Aberdeen FC fan!), much of my fiddling is influenced by the players and composers of the area. I attended Junior school in Glasgow, and at the same time, through the Glasgow Fiddle Workshop, was taught fiddle by Iain Fraser, and Amy Geddes. We moved to Angus when I was ready for senior school (in Dundee), at which time I was taught by Gill Simpson, and at the same time, Douglas Lawrence. Although still at school, from the age of 14, I was playing with the French Celtic Rock group, Le Clan. This happened after a chance meeting when I was busking (with my bagpipes) in the Ardeche market town of Aubenas and approached to come and perform with them. My lack of French didn’t appear to be so much of an issue as long as i could play music. I spent the next 3 years flying back and forth ( I know Prestwick, Stansted and Lyon/Marseilles pretty well) to play gigs with them, and record guest slots on two albums with the group. 20 years later, we maintain our friendship and I was recently in France for a reunion concert with the group. At the age of 17, and the day after leaving school, I ripped up my UCAS forms and (as a surprise to my parents) flew to the Dordogne to take up a post as a musician in residence, in an Irish pub (in Souillac). At the end of the contract, I crossed France, to pick up with Le Clan again. It was a time of my life where i said yes to everything which sounded appealing, so used this opportunity to explore Europe, New Zealand and the USA, taking a fiddle wherever I went. One evening, In Wellington (NZ), I decided that i should probably go to University and seduced by Politics, headed for the Stirling, a decision that allowed for the formation of the Castlelean Ceilidh band, and for me, more global travel (and tunes) with a year in Sydney (I am indebted to my long term friend (and former flatmate from Sydney), Adam, for many of the photos on this site). I am lucky enough to have had the opportunity to play all across the globe, both in formal performances, and informally, swapping tunes or songs with local musicians sometimes in the most curious of surroundings (a few spring to mind: a late night train between Delhi and Jaipur, where we played and sang all night; the Interislander ferry in New Zealand, where we just started playing and soon had a crowd; the Ghan, where I led a full ceilidh, with a bunch of journalists, on an overnight service between Adelaide and Alice Springs). Plenty other stories, but you’ll have to book me to hear them... I have also played extensively across the UK, both as a solo performer, as well as with bands, appearing in (on?) everything from nightclubs to retired warships. Particular highlights include Glastonbury in 2011, performing on May Hill (Forest of Dean) for May Day, playing for the National Trampolining Finals (3 years running, must have done something good there!) and the RAF Linton on Ouse Annual Burns Supper (3 years running), an opening night of a freshers week, with 750 international students, and many more.

Its you event - I'll be as flexible as i can to support your event!

Yes, I will ensure that i have everything i need

all over the world, from the smallest most remote village halls, to some of the biggest venues.

many, across the band

floating down the Rhone on a barge...

You are a blessing during these troubling times.

Good on you man.. great tune and a great room to play it in.

How lovely Duncan. Thanks so much for sharing. Super talented

Fiddlers in the UK