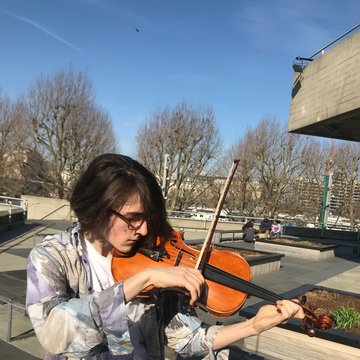 Dominic is a 19 year-old violist, pianist, composer and arranger looking for work in London, who currently studies at The Guildhall School.

Dominic is a 19 year-old musician based in Central London. Starting off as a chorister at Westminster Abbey - which he joined at the age of 7 - his musical career launched as he toured various parts of the world with his choir, such as Rome, the Vatican city, Budapest, Washington DC and New York. He became head chorister there in 2014, going on to win the sir David Wilcocks competition the following year. Recent performance highlights include performing with acclaimed Baroque violinist Adrian Butterfield in the London Handel Festival, and playing Beethoven's monolithic Grosse Fugue both in London's Purcell Room, and to renowned pianist Alfred Brendel in a masterclass in the Paris philharmonie concert hall. Qualifications include grade 8 distinction in both instruments. Recently, Dominic has created the contemporary arts group, 'Rothko Collective', championing new music and holistic artistic collaborations. He is currently studying classical viola at the Guildhall school of music and drama, under Mathew Jones.