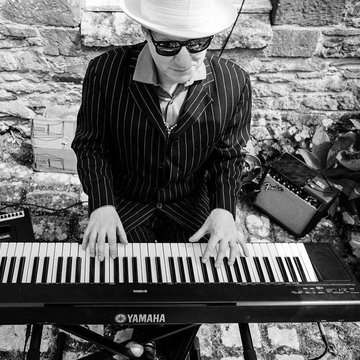 Piano player to many famous names - Paloma Faith, Paul Weller, Pauline Black, Sophie Ellis-Bextor, Laura Mvula, David Byrne; piano teacher to Jonathan Ross. Dom Pipkin has performed all across the world, with many famous TV shows to his credit - many performances on "Later" with Jools Holland, The Late Show in New York, the Jay Leno Show, Top Of The Pops, and many many more. Dom has performed for royalty, for the Olympic Committee in 2012, on main festival stages as musical director, in theatre, clubs, bars, and arena. Dom has a background in jazz and blues, although he can turn his hand to any keyboard-related work. He has held residencies at come of London's top clubs and bars, including Le Caprice, and currently 5 Hertford Street. He is an excellent classic and modern jazz player, and a blues, RnB , and especially New Orleans-influenced singer and player. Dom is one of Europe's foremost New Orleans piano specialists, with a solo theatre tour currently in progress, selling to full houses and great acclaim. He has been the subject of BBC Radio 2 and Jazz FM specials on the subject of New Orleans piano, and has performed at the prestigious Jazz and Heritage Festival and Piano Night in New Orleans (2014).

I can’t speak highly enough of Dom Pipkin, people were raving about him all through the evening. Very talented professional whom I look forward to hopefully book again.

I can't hold a candle to this guy, he's a great piano player.

I love your piano playing