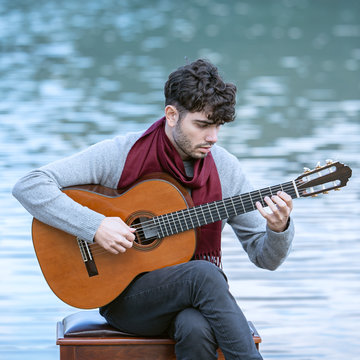 Soloist and chamber Musician based in London. Winner of more than 20 international Prizes! 2019 Winner of David Russell Guitar Prize!

Dimitris Soukaras is a Classical Guitarist based in the UK. He is considered as one of the most awarded and promising Greek guitarists of his generation. He is a Eurostring and D'addario Artist, a Yeoman of the Worshipful Company of Musicians, and winner of the IGF's Young Artists Platform. He has received 20 prizes international and national competitions, most recently he won the "David Russell" Guitar Prize adjudicated by the maestro himself, Mottola International Guitar Competition, "Ivor Mairants Guitar Award", Academy of Athens Music Award. Also, since 2019 he is the Artistic Director of MUΣA Concert Series which is a Music Festival happening during August in Corinthos (GR). As a soloist, he has performed with Ionio Symphony Orchestra as well as the Athens Mandoline Orchestra and has appeared in festivals in Greece and across Europe. He recently performed solo at the King's Place (London), Musikverein (Wien), Cervantes Theater (London), and Megaron Concert Hall (Athens) and has recorded for the national Greek Radio. In July 2019 was released his first CD “From Dawn to Dusk”. Dimitris is collaborating with major Greek contemporary music composers in preparation for a concert of premieres in spring 2020 at RAM. He is studying with Michael Lewin, Stephen Goss and Timothy Walker at the Royal Academy of Music, where he completed his Master's Degree with Distinction and is now studying the Advanced Diploma, supported by Athena Scholarship, Academy of Athens and RAM. He also received lessons with visiting professors David Russell and Fabio Zanon. He graduated with Honors the Bachelor of Music at the Ionian University under the guidance of Costas Cotsiolis and Korina Vougiouka.

Just let me know as soon as you get the new timing. I will do my best to assist you.

You can let me know a few songs you want to hear me play, and I will consider it.

Depends on the time I know this in advance, and which pieces are those.

My sound, passion, and expression.

in weddings, concerts in festivals across Europe. Also, recordings of CDs and radio.

solo recital at Musikverein in Wien

...Powerful technique, natural musicality and knowledge for musical interpretation. He combines all the elemetnts that one needs in order to succeed as an artist." — Costas Cotsiolis

He always has a provocative point of view, an inquisitive attitude, beautiful and orchestrally varied tone, lots of rhythmic energy, emotional width - everything I like to hear in a musician, he's got loads of it". ​​ — Fabio Zanon