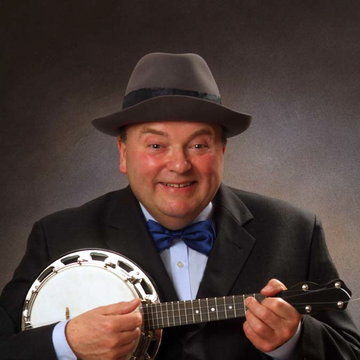 An accomplished singer, ukulele banjo player and actor having studied music and drama at the renowned Liverpool Crane Studios, Derek has a wealth of Musical Theatre, Variety, Music Hall and entertainment experience. Derek regularly performs a George Formby Tribute singing and playing his ukulele banjo not only as a 1940s Wartime Entertainer in 1940s shows but also in Music Hall Shows and at corporate and private functions. In addition to performing as a George Formby Tribute and 1940s Wartime Entertainer Derek is also a convincing Winston Churchill Lookalike and Sound-alike and gives an amusing Life Talk on Tommy Cooper which includes impersonation when telling jokes and performing magic tricks.

60-90 mins if using own sound equipment

Play in unique George Formby style. Engage with my audience-work from the floor and walk amongst them when I have a humorous banter with them.Encourage participation-singing and dancing when appropriate. Not a background performer.

“Just a short note to say how much everyone enjoyed Derek's wonderful "George Formby" Tribute. Everyone joined in the singing and laughed at his jokes, so can't be bad.” Staffordshire Country Markets

“Thank you Derek for making Dad’s 100th birthday party so special with your George Formby Tribute. He sang along with every song and was overwhelmed to meet Mr Churchill as well!" F.L.

“Our group thoroughly enjoyed the most animated entertainment and tribute to George Formby - a character close to most Manx hearts-given by Derek Herbert at our last meeting of the year.” Isle of Man Ladies' Luncheon Club

Banjos in the UK
Banjos in London
Banjos in Birmingham
Banjos in Manchester
Banjos in Edinburgh
Banjos in Liverpool
Customer Service
Discover
Company
As seen on
© Encore Technologies, Ltd.
Crafted with bagels and in London