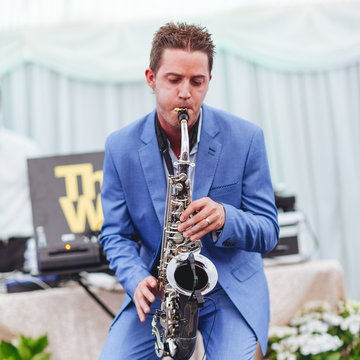 David Walker (AKA TheSaxWalker) is a successful solo saxophonist based in Ipswich, Suffolk and is currently performing across the whole of the UK and beyond! He’s performed for many prestigious clients including Fred Olsen Cruise Lines, St Elizabeth Hospice and more recently at England international rugby player Danny Care’s wedding, which was held at the beautiful Syon Park, London. As well as building up a reputable name as a professional saxophonist, David has built up a solid network of clientele and fans through his performances and You Tube channel. David is accomplished in playing both alto & tenor saxophones and specialises in performing the latest chart covers from Pop and R&B to smooth Jazz. Fully self-sufficient, David brings his own PAT tested sound equipment along to every performance where he’s accompanied by the highest quality backing tracks. He’s also fully insured and brings a copy of his Public Liability Insurance certificate to every event, something a typical venue will always want to see! Coming from an extremely musical family, David’s passion for music started at a very young age. He began learning the drums at the age of 5 and shortly after went on to learn the double bass. It wasn’t long before his primary school music teacher noticed David’s natural music ability. Being pushed by his mother, David received a scholarship to study at the London Guildhall School Of Music where he went on to further his musical interest. The saxophone was the final instrument David was very keen to learn, and he’s never looked back since! “It was like no other instrument I’d ever played before and I quickly fell in love with its tone and personality!” Over the years, David has managed to developed his own unique & funky sound. Some of his musical influences include: Eric Darius, Dave Koz, Richard Elliot and Gerald Albright, and to which all have certainly helped David develop into a fantastic player and performer!

David truly is a very talented musician as well as being a gorgeous young man! After a lengthy search I settled on booking David and didn’t meet him until the night of my 50th birthday masquerade ball! He was very professional and helpful leading up to the event and delivered a fabulous evening of music and entertainment. All my guests absolutely loved him – Do not miss out – book NOW!

David played at my wedding in October – couldn’t recommend him enough. We were lucky enough to have decent weather so we were all out in a courtyard, he created a great atmosphere and really set the day up. He knew exactly what to do on the day (with very minimal input from me) and made things super easy. Wouldn’t think twice about booking him again!

I booked David for a private party where the guest ages ranged from 8 – 80. He arrived in good time, was very polite, and not only did he look immaculate in a navy jacket and chinos, but he also played the saxophone very well! He had his own backing tracks for a range of music, and played 3 x 40 minute sessions throughout the afternoon tea party for 100+ guests in a stretch tent. I would have no hesitation booking him again at another of my events, when and if appropriate. Thank you David.

Couldn’t have been any happier with how David played at our wedding. It was absolutely perfect and everything we were hoping for. A fabulous saxophonist and a very lovely man! Thank you again!

Peter and I (Lisa’s parents) want to thank you for the amazing Sax entertainment you provided at Lisa and Chris’s Wedding on 22nd September. The sun and venue provided the perfect environment for your amazing music. You enriched the event with your wonderful sax. Thank you again – you were amazing! Xx

Couldn’t recommend David enough. He played at our wedding yesterday and it went down a treat with everyone both young and old. So many compliments from numerous people, thank you!

Alto Saxophonists in the UK