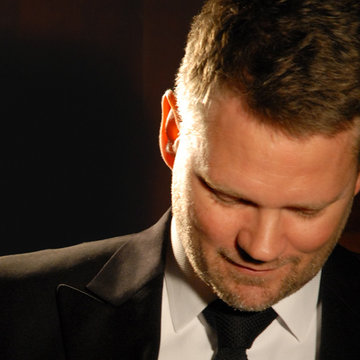 The Times, The Guardian and The Observer have compared David’s vocal style to that of Frank Sinatra, Mel Tormé and Chet Baker. Although his roots are firmly planted in the tradition of the classic Jazz singer, David delights in finding new ways to explore the Great American Songbook which results in a sound that is fresh, innovative and fun. “His light voice and crisp diction are ideally suited to fast tempos and witty lyrics both of which he handles with tremendous aplomb” The Observer With his Jazz trio, David has performed in clubs and theatres in New York, London, Amsterdam, Kuala Lumpur, Dublin and Vienna. He weaves a soulful thread of Pop into his classic Jazz repertoire which – combined with his distinctive use of loops, harmony, beat boxing and comedy – makes him unique amongst his contemporaries. “Sinatra’s phrasing and a delivery all his own” Jim Santella – All About Jazz His debut Jazz album Just in Time was ‘record of the week’ in The Guardian, and his follow-up album with the Jim Mullen Organ Trio – Builders Brew – was described by Times Jazz critic, Clive Davis, as possessing “the spirit of Sinatra”. David’s albums have been favourably reviewed in The Times, The Guardian, Jazzwise, The Jazz Journal, Jazz UK, Crescendo & Jazz Magazine, Musician Magazine, UK and All About Jazz. "One of the best in the business" Brian Blain – Musician Magazine Since training at the Guildhall School of Music and Drama, David has performed in a wide variety of settings and is equally at home singing with the RTE Concert Orchestra at the National Concert Hall in Dublin, as he is performing with his trio at Ronnie Scott's. David has sung with Jazz stars Claire Martin, John Wilson, Jim Mullen and Kirk Leightsy in venues as varied as Bristol Old Vic, 59E 59th St Theatre New York, Voorout Theatre Belgium, Soho Theatre London, The Royal Opera House, 606, Pizza Express Soho, the London Jazz Festival, the Kuala Lumpur Jazz Festival, the Ritz, the Waldorf and the Dorchester. “A rising star – a cross between Mel Torme and Chet Baker” Crescendo & Jazz Magazine David has also appeared with the John Wilson Big Band, the RTE Concert Orchestra, the National Youth Jazz Orchestra and the Skelton Skinner All Stars Big Band. He was interviewed on the Russell Davies Show on BBC Radio 2, as well as receiving airplay from Jonathan Ross, Humphrey Lyttleton, Jacqui Dankworth, Clare Martin OBE, David Jacobs, Desmond Carrington, Helen Mayhew, and Campbell Burnap. For more information please visit: www.davidtughan.co.uk

Sinatra
Cheek to cheek
Come fly with me
Fly Me To The Moon
For once in my life
I could have danced all night
I get a kick out of you
Lady is a tramp
Love & marriage
My way
New York ,New York
One for my baby
That’s life
The summer wind
The way you look tonight
They can't take that away from me
Under my skin
Witchcraft
You make me feel so young
Sammy Davis Jr
Mr Bojangles
Michael Buble
A foggy day
All of me
Cry me a river
Me & Mrs Jones
The best is yet to come
Sway
Home
Call Me Irresponsible
Jamie Cullum
Singin' in the rain
These are the days
High and Dry
Nat King Cole
L.O.V.E.
Let there be love
Let’s face the music & dance
Orange coloured sky
Route 66
Unforgettable
When I fall in love
Smile
Harry Connick Jr.
It had to be you
I Could Write A Book
Our Love Is Here To Stay
Don’t Get Around Much Anymore
We Are In Love
Recipie For Love
It’s Alright by me
Paul Anka
The way you make me feel (swing version)
Walking in Memphis (swing version)
Wonderful tonight
Wonderwall (swing version)
True
Robbie Williams
Ain't that a kick in the head
Have You Met Miss Jones
Angels
Bobby Darrin
Beyond the sea
Mack the knife
As Long As I'm Living
Tony Bennett
I left my heart in San Francisco
There'll Be Some Changes
A Foggy Day
Miscellaneous
All the things you are
Almost like being in love
Alright OK you win
Always on my mind
As time goes by
At last
Autumn leaves
Blue Moon
Can’t take my eyes off you
Chicago
Dream a little dream
Everything
Fever
Georgia On My Mind
Get here
Girl from Ipanema
Have You Met Miss Jones
Is you is, or is you ain't my baby
Let’s do it, let’s fall in love
Misty
Moondance
Moonriver
Mr Bojangles
My baby just cares for me
My Funny Valentine
Secret Love
Somewhere over the rainbow
Steppin' out with my baby
Strangers in the night
SummertimeTry a little tenderness
What a wonderful world
World on a string
You are the sunshine of my life
Customer questions

Absolutely, what you see is what you get!

Yes, from Solo to quintet.

I'm very flexible to your requirements and can accommodate to a reasonable amount of circumstances.

Yes, I can provide music in the intervals.

Yes, though some backing tracks are better than others..

Yes, all PA equipment and insurance in included in the price.

Yes, most of them will be in my repertoire anyway and I always do my best to accommodate a few of your song requests that aren't.

Passion for the songs and a good sense of fun with the audience.

All prices include:P.A. System. Music / DJ during the intervals. Insurance.

10 months ago- David is an amazing performer with a stunning voice. I've seen him perform at Ronnie Scott's on a number of occasions and he never disappoints. His vocal range is outstanding plus his charm and wit make for an unforgettable evening.

I heard you and your great band play at Ronnie's on Tuesday night and came to thank you. I then asked for a cd which I wished to buy from you. You were kind enough to give it to me and it is a very lovely gift as I am really loving listening to it. There's a beautiful quality to your voice, which is also full of feeling. It was wonderful to experience the contrast between your band and the following one - the mellifluous, mellow, joyful, easy, enlivening beauty of your band contrasted with the wild, enlivening, Latin/African rhythms with a bit of mellow thrown in. Fabulous! Especially as we need both. I really loved the way you vocalised the bass line, amongst many other highlights. As we listened to your band we kept remarking on how amazing you were for a support band. We will certainly tell friends about you, play them your cd and I'd like to buy your next cd. I look forward to seeing your band again and will sign up to keep being posted news of events. Thank you and the band so much. You really shine when you sing which makes us all feel good. So keep shining! With very warm wishes for continuing success, Jasmine Peri

You were brilliant!! We just wanted to say how fantastic you were performing at our wedding and how much we appreciated your professionalism and relaxed style. The day went like clockwork, was unforgettable and everything we had hoped for. You were brilliant!! The feedback we got from our guests was amazing. Everybody was blown away with your performance. You were a major highlight of the day! Some guests didn't realise you sang our exit song as they couldn't see you! They thought it was a CD! That's how good you were! We were delighted to be able to get to see and hear you after the official photos and the timing of being able to have our impromptu dance to L.O.V.E was perfect! You made the day extra special for us and our guests. Thank you so much. Would love to come and see you perform again when you are gigging. Once again, thank you.

Fantastic Artist David Tughan! David recently preformed at a private party for my for my Father's 80th Birthday Party. We were blown away at his talent and professionalism. He looked the part and he certainly sounded the part. My Dad loves Sinatra and the 'rat pack' as that was the type of music we asked David to sing. He sung a great variety of songs which was 2x 45 min sets. Only the party organisers were aware that David was coming to perform. David arrived and set up without any of our guests being aware of what was to happen and What a fantastic surprise as was David started singing all our guests were wowed at what was happening. We all thought David was amazing and would certainly recommend him or hire him again. He also did jazzy versions of well known songs which were amazing! Weeks later our guests are still talking about it. Thank you so much David, we loved hearing you sing and you're a real entertainer I hope you go far! Joanne Morley

Dave Tughan is such an incredible singer and all round entertainer. I've seen him at half a dozen live shows and every time it's different and memorable. His repertoire is broad, and he moves with ease from beautifully sung ballads like 'A nightingale sang in Berkeley Square' to more modern and uniquely arranged tunes like 'What's Goin' on'. His voice is so romantic and rich. Close your eyes and it's Frank singing. But he can really swing too, and there's some great arrangements. Using some clever technological trickery he managed to sing and create a wall of amazing live vocal harmonies and you'll never hear a more swinging and bonkers version of 'Route 66'. It's brilliant! He's also a really funny and warm host. I saw him compere a great wild night upstairs at Ronnie Scotts in Frith Street earlier this year. Highly recommended.