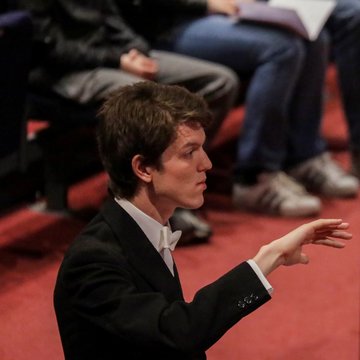 Head of Choral Music at Solihull School. Previously studied at Cambridge and Birmingham.

David Rice is head of choral music at Solihull School, where he oversees an enviable choral programme including weekly choral evensong with the school's various chapel choirs. David graduated from Selwyn College, Cambridge, in 2016 with a BA in Music. He was an Exhibitioner in the chapel choir at Selwyn, and accompanied the choir on the organ in services and concerts. During his second and third years he was also director of music at St James’ Church, and he gained the ARCO diploma in his final year, winning the Sawyer and Durrant prize for the practical part of the examination. While at Cambridge, he conducted various ensembles, including the University of Cambridge Philharmonic Orchestra in repertoire such as Elgar’s Sea Pictures and Cello Concerto and Dvořák’s Violin Concerto. David was very active in student theatre, and worked on a variety of musicals and operas. He was also in demand as a repetiteur and continuo player for concert projects including Haydn’s Nelson Mass and Monteverdi’s Vespers. Following university, David spent a year as organ scholar at Tewkesbury Abbey and organist in residence at Dean Close School, Cheltenham. His duties included regularly accompanying and conducting the many school choirs and Tewkesbury Abbey Schola Cantorum. He also built up an active presence in Gloucestershire as a deputy pianist, organist and conductor for a variety of choirs. More recently, he moved to Birmingham to study conducting at the university, taught by Simon Halsey. He frequently performed as a singer, conductor and accompanist with all the university choirs, and also sang in the City of Birmingham Symphony Chorus.

Tewkesbury A, 4 years ago

David is a serious and committed student, with a broad experience of the English choral tradition in general and as an organist and fine bass singer in particular