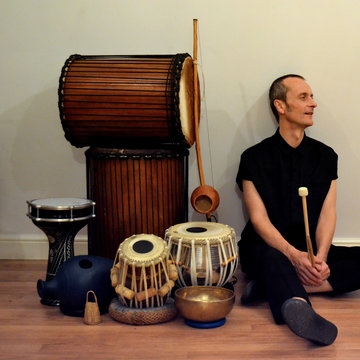 I will always do my best to be flexible and to work with you at every stage of your event.

This isn't a service i offer.

For Gathering Of Drums it takes 1.5 hours to set up. If it can be done offstage then it will only take 15 - 20 minutes to get it into place on stage.

I'm definitely happy for you to choose which instruments you would like more focus on than others. For example you may prefer a more gentle chimes based atmosphere, a more powerful drumming one or as i usually play - a balance of the two.

Yes i bring all the instruments.

I am very much open to working with you for any specific percussion pieces you would like playing.

They are taken on a journey and are transported to another place. They love the poetry / spoken word and the gentle though powerful energy.

Working with various units throughout the hospital (Addictions, Eating Disorders, Personality Disorders and Adolescent services) the music classes David provides have become a valuable part of our treatment programme. He has adapted each class to provide for the different requirements of each specialist group. The classes have proved to be an inspiring, creative, therapeutic outlet for patients who are able to become truly self-aware and have encouraged clients to overcome fears and reinstated a belief in their own possibilities. This is mirrored by a definite change in their body language and mood. This group has become one of the most popular on our programme. ​