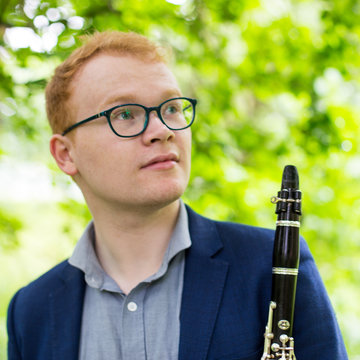 Welcome! Click on my media tab to hear me play. Scroll down for my biography.
Clarinettist
London
Public liability insurance of £10 million

I am a clarinettist, singer, pianist, composer, arranger and educator. I graduated from the Royal Academy of Music with a Master’s degree in clarinet performance in July 2017, having studied with Mark van de Wiel (Philharmonia and London Sinfonietta) and Christopher Richards (London Symphony Orchestra). Since moving to London, I have made the most of any opportunities to develop my skills in creative leadership. I see this forming a major part of my future career: it’s on us, people highly trained in the arts, to use our skills to enable everyone to engage with the arts and explore their creativity and expression, regardless of their background and ability. So I followed a course in the Open Academy department at RAM which took me to children’s wards, old people’s homes, and schools of all sorts: from coaching grammar school sixth-formers, to improvising with children with special educational needs. I have worked for English Touring Opera’s Education department, and organised school visits for University of London Symphony Orchestra in my role as Outreach Officer. The peak of my performing career to date was performing Mozart’s Clarinet Concerto with Oxford Philharmonic Orchestra, as a finalist in their Concerto Competition. I have performed with the Melos Sinfonia, Janus Ensemble, Facade Ensemble, London Young Sinfonia, Amadeus Academy Orchestra, London Mahler Orchestra, Orion Orchestra, and the Johannes Ensemble, and participated in sit-in schemes with the London Philharmonia and the Oxford Philharmonic. I cut my teeth as an orchestral musician in the National Youth Orchestra, under the coaching of renowned instrumentalists and conductors, and had the opportunity to perform at prestigious venues and festivals including the BBC Proms and the Barbican. I have arranged music for the Oxford Philharmonic Orchestra and Joyce Di Donato. In 2014, I graduated with a 2.1 in Linguistics (BA) from Cambridge University, where I was a Derek Cornwell Instrumental Scholar for two years in a row, and played in both the main university orchestras: in Symphony Orchestra as bass clarinet and Chamber Orchestra as principal clarinet. Having been a laureate of the Cambridge University Musical Society Concerto Competition twice, I had the opportunity to perform concerti by Weber, Finzi, Copland and Debussy (Premiere Rhapsodie). Other competition successes include winning the Howarth Prize for Most Outstanding Wind Player at the North London Music Festival (2014), performing Mozart’s Clarinet Quintet in the Sheldonian Theatre, Oxford, as a beneficiary of the Oxford Philomusica Young Artists’ Platform (2008), and being one of five finalists at the Chandos Young Soloist Competition (2010).