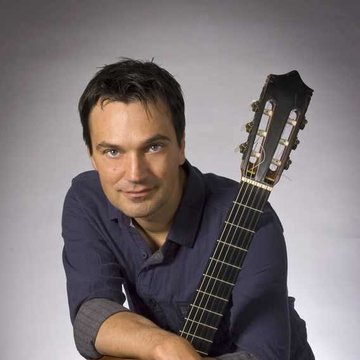 David Jaggs attended the Guildhall School of Music and Drama in London under the direction of Antonio Albanes. After graduating with distinction, David was privileged to become a private student of one of the world's leading classical guitarists, Manuel Barrueco in New Jersey, USA. David has won several prizes and scholarships including the Peter Latham Leaving Scholarship and the Marjorie and Dorothy Whyte Award. He has appeared on numerous television and radio programmes. His career has taken him to many major venues up and down the country both as a soloist and in ensemble work. David feels equally at home in the world of easy listening music and has produced eleven popular albums in this genre. He has also taught as a visiting lecturer at various centres including the Guildhall School of Music, London, Brussels Conservatory and at the Volterra project in Italy. Over the last twenty years he has played at literally thousands of events, concerts, shows and functions at major venues including Excel London, NEC Birmingham, SEC Glasgow, Event City Manchester and also appeared at hundreds of RHS flower shows, County Shows and Heritage events. As well as performing David also has his own record label and has recorded several major artists including Antigoni Goni, John Mills and David Miller.

Time to say Goodbye
Love Changes Everything
Cavatina
Theme from the Mission
Asturias
Recuerdos de la Alhambra
Romance
My Love is Like a Red Red Rose
Skye Boat Song
Right Here Waiting
Here Comes the Sun
How do I Live Without You
I Dreamed a Dream
No Matter What
Bright Eyes
Tears in Heaven
Classical Gas
Theme from Rodrigo's Guitar Concerto
Can You Feel the Love Tonight
Titanic theme
I Will Always Love You
Annies Song
I Know Him So Well
Smoke Gets in Your Eyes
Memory
The Way We Were
Music of the Night
All I Ask Of You
Wind Beneath My Wings
Fields of Gold
You Were Always On My Mind
Ave Maria
The Dark Island
Unchained Melody
Hallelujah
From a Distance
Somewhere Over The Rainbow
Etc...
Customer questions

“I always try my best to be flexible to help ensure your event runs as smoothly as possible. If timings change slightly in the run up to the event just let me know.”

I usually set up about 1 to 1.5 hours before the performance time.

Yes. All I will need is a standard power socket.

If a song isn't included in my song list there is still be a chance I already know it. If there is a special song you'd like me to learn I am happy to do this for you. There is a fee of £30 for this service to take into account rehearsal times etc.

They love the relaxing, ambient atmosphere I create, unless they are guitarists in which case they enjoy watching my technique!

Too many to mention!

Live TV in front of 10 million!

It was brilliant! David played exactly as we had envisaged and Iv had very favourable feedback from the wedding guests! So pleased we chose David.

I engaged David Jaggs to play at a friends 60th birthday party. David was very good at discussing the repertoire prior to the event. The aim was to create an atmosphere enjoyed by a diverse group of people spanning a large age range from the very young to the very old. We were more than pleased with the result, beautiful music beautifully played added an extra dimension to the evening.