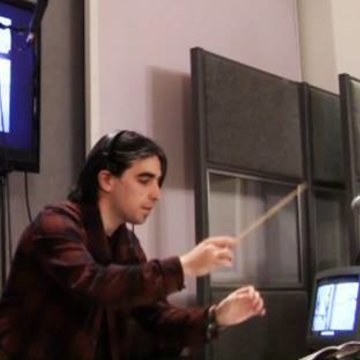 David is an accomplished composer for theatre, film, and concert, a trained violinist, a folk fiddle player and an all-round OK guy!
3 of 3 photos
Composer
London

David Denyer is a London-based, multi-award-winning composer, violinist, and graduate of the Royal College of Music. He completed his undergraduate degree in violin performance and composition at Leeds College of Music, for which he achieved first-class honours and won the Robert Tebb award for Outstanding Performance, and he completed his masters degree in composition for screen at the Royal College of Music, for which he achieved distinction, graduated top of his class, and won the Joseph Horovitz prize in composition for screen. David is very prolific within the experimental and fringe theatre scenes in London. He is an associate artist of Dirty Rascals Theatre, is resident composer for Collide Theatre, and Helicon Storytelling, a frequent collaborator with Pentire Street Productions and Fox & Chips Productions, and nurtures a number of longstanding professional relationships with theatre directors and producers in London. Additionally, he has worked frequently in film, video-games, is a founding member and performer in the Echoshed Collective, is a co-founder of the newly-established Quiet Tyrant record label and generally takes any opportunity to fill dark rooms with unbearably loud and deeply unsettling noises.​

What makes TROY a unique show is a brilliant incorporation of music and song into the language of the play. With original composition by David Denyer, each actor-musician is armed with an instrument which they use for deadly poignancy. A violin ominous in tone is caressed like a child. A growling cello, when laid down, becomes a corpse. And a taunting accordion transforms into a set of gasping lungs. The fusion of these three instruments oscillates between melancholic cries in unison, deafening crescendos and intimate softness.