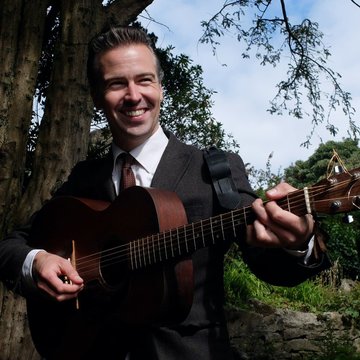 David’s playing is seeped in the tradition of American folk and blues guitar, from the rags of Blind Blake and Reverend Gary Davis, to the delta blues of Robert Johnson and Charley Patton. He is also an accomplished harmonica player in the country blues tradition of Sonny Boy Williamson I and Sonny Terry. His involvement with the Lindy Hop scene nudged him in the direction of early jazz and swing, but the standards Louis Armstrong may have sung still posses a rural quality. He cut his teeth playing in country and folk bands and will still play the odd bluegrass number if the feeling takes him. His reworking of traditional songs breathes new life into well worn standards and his original compositions the give a nod to the rootsy side of Bob Dylan, Leonard Cohen and Townes Van Zandt.

Ain't Nobodies Business
Ain't That Just Like a Woman
Alabama Bound
Atlanta Blues
Careless Love
Dealing With the Devil
Down by the Riverside
From 4 Until Late
Glory of love
Goin' Down Slow
Got my Mojo Workin'
I Got A Woman
Kansas City
Key to the Highway
Let Me Got Home Whiskey
Long Gone
Love in Vain
Dust My Broom
My Babe
After You've Gone
The Way You Look Tonight
Sit Right Down And Write Myself a Letter
Sugar in My Bowl
Oh When The Saints
Rollin and Tumbin'
Run me Wild
San Francisco Bay Blues
Shotgun Blues
Sitting On Top Of The World
St James Infirmary Blues
Step it up and Go
Sunny Side of the Street
Sweet Home Chicago
This Little Light of Mine
Up above My Head
Wabash Rag
Walk Right In
When You're smiling
How Could You?
Kindhearted woman
Show Me The Way to Go Home
Lover Come Back to Me

We both wanted to say thanks again for your performance on Saturday. I know it wasn't a conventional set up but it was perfect to us. We've had some fantastic feedback from our friends about your material. Thanks again and hopefully meet again at one of your gigs.

Hi David, thanks for playing the other week, fabulous gig and we'll definitely have you back.

Hey David, Thank you so much for Saturday! You were all fab as ever. I had a wonderful time.

Just to let you know we got lots of positive feedback from the students about your band in our questionnaire.