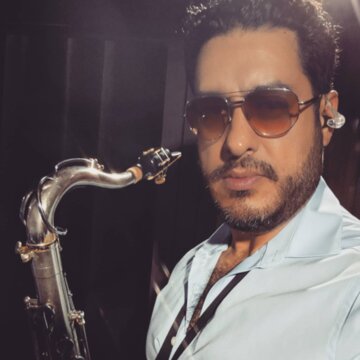 San Francsico-Native and Unison Saxophone Artist, available in the South of UK for jazz and function gigs, lessons and masterclasses!

David Baron Stevens is an exciting and emotional musician with a career expanding beyond the borders of the birthplace of Jazz, the Americas. Growing up in California’s rural San Joaquin Valley, he was surrounded by fine music educators and players, such as Susan Burley (Shagoian), Paul Shagoian, and Bill Butts, who helped carve the path for a young valley musician to be able to open for Lionel Ritchie, at the age of 19, on the Millennium New Years’ Eve Party at the Mirage in Las Vegas. That next year brought him to Carnival Cruise Lines, working as a Show Band Musician for contracts during January 1999 – 2004 and again in 2012-13. All the while, he earned Dual Associates’ Degrees in both Instrumental and Vocal Music from, and studied Sound and Recording Engineering at, College of the Sequoias in Visalia, California, USA. Only one year after beginning training as an apprentice of two world-class musicians, Jeff Clayton (Clayton – Hamilton Jazz Orchestra) and Tracy Harris (Yamaha Flute Artist), Stevens was not only accepted to the private studio of Victor Goines (Juilliard, Lincoln Center Jazz Orchestra), but was also a finalist for Berklee College of Music’s first-ever Presidential Scholarship. Throughout his career, DBS has enjoyed tremendous opportunities to play with such jazz greats as Steve Allen, Ed Shaunassy (Tonight Show with Johnny Carson), Mark Levine, Oscar Hernandez (Spanish Harlem Orchestra), Dave Samuels (Caribbean Jazz Project, Spyro Gyra), Wayne Wallace, Eric Marienthal, Wayne Bergeron, Joe LaBarbera and many others. Stevens loves to perform his compositions in front of a live audience. You’ll see this in some form of The World Jazz Ensemble, which premiered on the main stage at the 2010 Bakersfield Jazz Festival. With each song based in a local rhythm from a different part of the world, he takes you around the world for a trip in how language and culture flavor our music and celebrate the differences as well as the common thread found as all these genres of music have enriched America’s classical music, jazz. From Salsa in New York, to Smooth Jazz in Los Angeles, to Cuban Bolero and Argentine Tango, to even Spanish Flamenco and French Gypsy Jazz, Stevens’ music remains all original, yet a reflection of the various facets of his own personality and heritage. He is born to an immmigrant Salvadoran mother and a Romani father, and couldn’t be more 100% Californian. Most recently, DBS has been performing in the UK with And Finally…Phil Collins, “the UK’s #1 Phil Collins Tribute Band”, is a regular performer at the Southampton Modern Jazz Club, and has shared the stage with many fine British musicians, including Jonathan Fashole-Luke, Ted Carrasco, Paul Young, and Matt Findlay.

We always try our best to be flexible to help ensure your event runs as smoothly as possible. If we can accommodate at no cost, we will endeavor to do so. There may be fees for changes longer than an hour.

Absolutely. This is a really popular request and we actually offer this service for free. If you'd like a proper DJ service via our PA after the final set until the venue closes, we can provide this starting at an additional £100, depending on the timing.

We usually set up 1-1.5 hours before performance time. As soon as our PA is set up, we are happy to provide a free playlist service to help set the ambiance and get your guests ready for our live performance!

I can offer you 3 song choices from my repertoire at no additional fee. More may be chosen with a fee. That being said, our set lists are crafted from countless performances and what works well to make the guests feel great and have a great time.

Yes! We bring all our own gear, and the highest quality at that. All we require from the venue or client is rated power close enough to our performance area.

If a song isn't included in our song list there may still be a chance we already know it. If there is a special song you'd like us to learn, we are happy to do this for you. There is a fee of £30 for this service to take into account rehearsal and music preparation, etc.

David is a fantastic musician, both as an improviser and as a member of a horn section. He depped [as a substitute] in my band and did a great job musically (great tone, rhythmic feel, stylistic knowledge and intonation), as well as looking the part onstage. Also a great guy to hang out with on the set breaks and on the journey home.

Dave is a great guy and a fine musician. I have always enjoyed playing sessions with him. Always brings a good energy to every situation he performs in. Good company on journeys!

It's been a real pleasure meeting David, always manages to bring a smile to my face, as well as the audience, when jamming at open mics with him. His rendition of "Sing a Song of Song" by Kenny Garrett was truly exceptional. Definitely an all round nice guy with an exceptional talent.