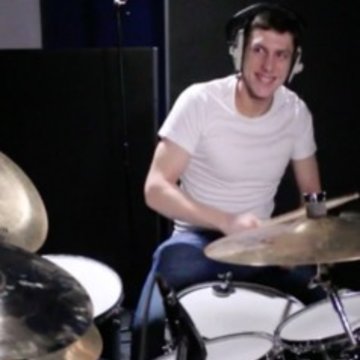 Darren is a freelance session drummer and tutor whom recently graduated from The ICMP with a first class honours (BMus).
Drummer
Chatham

Darren Angus is a freelance drummer and drum tutor from Chatham, Kent who currently focuses his time mostly on his teaching and getting session gigs along side his studying at the Institute of Contemporary Music Performance. Darren has been a freelance musician for over 9 years and has taught for over 5. His experience in teaching ranges from individual drum tuition from 5 years to adults of different backgrounds, abilities and learning needs, to large groups of up to 30.With a passion for the drums. he strives to pass this onto to each and every student he gets the opportunity work with. After lessons with both Jonathon 'Wol' Webster (The Blues Brothers, Eddie Floydd...) and Neil Martin (Jimmy Barnes Band, Del Shannon...), Darren is comfortable in a variety of different styles and genres, covering blues, soul, R'n'B, Disco, Dance, Contemporary, funk, rock n roll, rock, pop, metal and everything in between. Darren's first experience behind a drum kit was actually live! At the age of 12, at a wedding reception for his cousin and was intrigued by the drums of the band Kovak who were playing and asked if he could play them. They had already had finished and started packing up with a DJ now paying but, the drummer still said yes. Darren was playing on a kit without cymbals or hi hats and was given a tutorial and had started playing along with the DJ. It would be great to say he was a natural but, he was not. The looks of peoples faces were apparent of that. After a couple of songs Darren did get the hang of it and was playing in time and was really enjoying himself, which led to his lust for drums. Darren has played at a number of successful events, including playing along side Mentallica, Pressure Head, Spyder Byte, Near Ruin, Illuminites, played at the KMFM Road show, playing for charities such as Help for Heroes and Demelza UK. Other charities Darren has played for include Combat Stress and Macmillan Cancer Support.. Darren has played in front of a number of crowds reaching over 5,000. With his band Hold Your Fire, he managed to record their debut album, 'War Heroes' with their top 4 singles but sadly did not last as a band much longer after this due to some friction between members. After completing his Bmus (Hons) course at ICMP with a first class honours, he is now looking to start gigging on cruise ships, to gig overseas to create a fan base for future gig opportunities. It is something that has always interested Darren and he plans to at least do one cruise ship gig. Being a well known drummer around the world has always been Darren's dreams. He would like to be known as mainly a session drummer, drumming for many different bands, but also as a drummer to his own successful band.

It was obvious that Darren spent a long time honing his rudimentary skills which made him a very polished musician. The precision and execution of his music was remarkable, if not enviable. Darren displayed an instinctive compass and metronome when it comes to music: never lost and never out of time. His mentality and appetite towards practice was also outstanding. I have every confidence Darren will continue to make big strides in his musical endeavours

one of Medway's finest upcoming musician

Drummer in my brain (I’m not joking) Darren is one of the most technically proficient and talented musicians I have ever met. The first time I ever played in a band with him I felt like my own musical monster had finally come home to rest, that I had found what I had been looking for. Darren is patient and understanding and can read the groove and feel of a song (and the funny looks on my face) like a book. In the past it’s like he’s been in my head reading music from a score. I’ve played with many people over the years and none have shown the professional courtesy, compassion, patience and raw talent as Darren. He has grown to be one of my best friends and has continuously proved to me over the years that he will continue to work at something until it is pitch perfect.