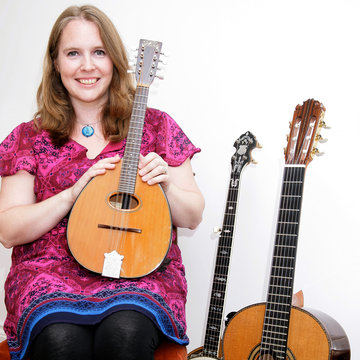 Danielle is a 19th century fretted instrument specialist, a devotee of the Classic Fingerstyle Banjo, Early Romantic Guitar and the Mandolin. Having studied with Craig Ogden and Mark Ashford, she graduated from Birmingham Conservatoire in June 2001. She performs in a number of ensembles who specialise in 19th century fretted instrument performance, particularly with Mark Willetts with whom she performs as Dodici Corde (www.dodicicorde.co.uk) and at present is the world's only female professional fingerstyle banjo player. Danielle's performances have taken in a wide range of established venues and festivals including St avid's Cathedral Festival, The Royal Festival Hall at The South Bank; The Bolivar Hall, London; the CBSO centre in Birmingham, the Royal Philharmonic Hall, Liverpool and Birmingham Town Hall; at York Guitar Festival, Bath Banjo Festival, Droitwich Festival, Jane Austen Festival, Bath; Hagley Music Festival and numerous appearances on BBC Radio and Television. As well as her performing career, she runs a thriving private teaching practice and also directs the Midlands Fretted Orchestra (www.m-f-o.co.uk) which she founded in September 2001 to promote the ensemble playing of fretted instruments. The orchestra is based of the principles of the original fretted orchestras which were popular in the 19th Century, and is one of only a handful of similar ensembles in the UK. Recent projects include Gr8 Guitars for Classical Guitarists who have achieved Grade 8 standard and Friendly Folk (Folk Sessions for the Plucking Terrified)

I wanted something a little special for my joint 60 th bday party and decided upon a classical guitarist to perform during the drinks reception Having looked through long lists of local artists I came across Danielle’s details. I liked both the fact she is a lady and thought she had a lovely appearance. I listened to some of her performances on u tube and decided she sounded perfect. It was easy to make arrangements and Danielle was very flexible and the cost was well within the budget I had set. Before the day she tied up with me to ensure all was as planned. On the arrived as agreed with time to set up before guests arrived. Although there was a lot of noise, Danielle played without hitch and I was very happy and impressed and it was lovely that she did not clock watch or rush off after the agreed duration. I would not hesitate to recommend her, Thanks Danielle.