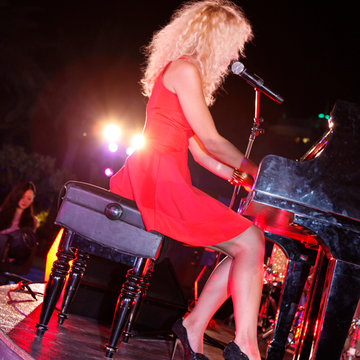 Danielle is an excellent pianist and vocalist, and is a superb solo performer of the highest standard. Her repertoire of standards and modern music is perfect for our cruise ship guests, and for various special events on board. Many of the songs in her repertoire are performed with her own arrangements which make them interesting to hear, and create a unique identity. Danielle always projects an elegant and sophisticated image whenever she is performing, and maintains a smart appearance when off-duty. I have been very pleased with every aspect of Danielle’s performance, behaviour, reliability and guest ratings. She has been a valuable member of my entertainment team. I highly recommend Danielle and I look forward to the possibility of welcoming her back on board one of our ships when her schedule permits.

Danielle Booysen is an AMAZING musician!

Danielle the singer - thank you to excellent music each night.

Danielle Bo(o)ysen, would have loved to see her more often.

Bernd U, 7 years ago

Danielle has been working for me as an artist for the past 3 years. She performed as a resident artist in our Friday brunch, special events such as Christmas, New Years Eve or Easter brunch plus on a weekly basis in our cocktail bar, Healeys Bar & Terrace. Danielle has an amazing talent on the piano what matches her ability to sing and perform. In those past 3 years she has shown that she is a professional entertainer who can be trusted and relied on. She has never been late to perform, very flexible in her working schedule and always positive cheerful towards her work, employer and guests. More importantly her skills, talent plus personality have build up over the years a large group of followers and regular guests who valued her performance and talents. We wish Danielle all the best in her bright and successful future.

Clarita A, 7 years ago

Danielle Booysen is easily one of the most talented singer/pianists that Dubai has seen in recent years. Aside from her musical training - Danielle is wealth of musical knowledge - her ability to adapt, adjust and improvise within different surroundings has consistently impressed all of the musicians lucky enough to work with her. Not only a lover of jazz and the classics, Danni was always keen to discover new music from all manner of genres whether it be Pop, Rock, Soul or R&B. She always has an extensive catalogue of music to draw upon, but is also not afraid to launch into something new and unrehearsed, often adding her own unique style to it with her confident and distinctive vocal style. Always friendly, approachable and grounded, Danielle has always been a pleasure to perform with and an absolute joy to watch.

Singing pianists in the UK