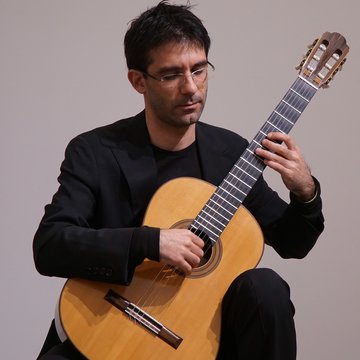 With over ten years’ experience, Daniele Piroddi is an accomplished classical guitarist from Italy who now lives and works in London. Over the years he spent time studying and researching sound and timbre. He believes that the timbre of the sound of a music instrument can bring the audience to immerse themselves in a world where colours can be heard and sounds can be seen. This has had a big impact on his work and repertoire. His work focused on western early music with a touch of modern and contemporary repertoire. Daniele graduated with a Master’s Degree with 110 cum laude with a Special Mention in Classical Guitar in 2018 from Modena Conservatory with Maestro Andrea Dieci. His thesis entitled ‘Royal Winter Music; Sounds and Colours in an Imaginary theatre’ focused on the work of first Sonata for solo guitar by Hans Werner Henze based on Shakespearean characters. Born in a small town in Sardinia, Daniele’s studies in music begun at the Civil School in Cagliari. From there, his passion for music led him to travel miles away from home to Giuseppe Tartini Conservatory in Trieste, where he received his Bachelor’s Degree. There, he attended several masterclasses with Roberto Masala and Andrea Dieci, Jukka Savijoki, Franco Saretta, Hubert Kappel, Claudio Po Liviero, Lucia Pizzutel, Francesco Molmenti, Frederic Zigante, Oscar Ghiglia, Antonio Rugolo, Vincenzo Zecca and David Russel. He also attended chamber music masterclasses with Teresa Leopold and Mario Mortore where he performed the concert for two mandolins and orchestra by Antonio Vivaldi. He honed his skills in classical guitar at the Giulio Regondi Guitar Academy in Milan where he concentrated on modern music and at the School of Ancient Music (SMAV) in Venice, with Maestro Massimo Lonardi where he sharpened his skills on renaissance and baroque music. Daniele has also played in several chamber music groups. He was a member of Gorizia Guitar Orchestra giving concerts in Italy, Croatia and Slovenia. In 2017, he played in an ensemble group, Tierkreis Twelve Zodiac Melodies by Karlheinz Stockhausen. In 2015, together with Teo Fornasier, he created a guitar duo called Elianto Duo and they toured around Italy playing in well-known concert halls and festivals, such as The Ridotto of Teatro Comunale Luciano Pavarotti in Modena, the San.Rocco Auditorium in Carpi, San.Giacomo Festival in Bologna, Aperiguitar in Carpi and other important events. Elianto Duo also played at the opening of GuitarMind music salon in 2017. He was also invited to perform on Paganini Marathon during Paganini Festival, playing several original guitar compositions at the Stanza del Suono in Parma, at the Sala Dante in La Spezia and at the ISSM in Modena. He took part to the integral execution of the Opus for Lead Guitar by Hector Villa-Lobos in Modena, Carpi and Melzo. He widened his knowledge about Renaissance music, attending Vihuela lessons with the master Massimo Lonardi. Daniele is also an accomplished music teacher, who has taught in several civic schools such as those in Mandas and Domusnovas, Giuseppe Verdi School in Trieste and Flauto Magico School in Modena and a seminar in Nagib Mahfuz School in Milan. Since moving to London, Daniele has been performing in private events and giving private one to one guitar lessons. He is also a teacher at Fireworks Music School, one of the largest and most highly regarded music schools in London.

Verified
Loaay A, 1 year ago

Daniele is a pro. We agreed to the songs list in advance. He showed up on time. He was friendly to talk to. Daniele explained a few anecdotes about each song when asked, which made this intimate private event even more special. His skill level is outstanding! This is not a background music performer that you can ask him to play whatever come to your mind on the spot. This is a true musician that you want to enjoy his musical performance with full attention.

We choose Daniele to perform on our private concert for my dad’s 80th birthday and we couldn’t have been happier. Daniele is a real professional and talented. You could clearly see he loves what he does and is passionate about classical music. He was able to give us some short anecdotes on his pieces which made the whole performance even more entertaining. My dad was over the moon and thanked me for finding him!