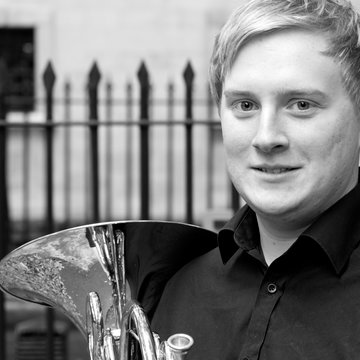 Daniel de Souza began playing the Horn at the age of 8, learning with his father Simon de Souza. During his school years he became principal horn of the Berkshire Youth Orchestra, and was a member of the National Youth Wind Orchestra of Great Britain, before joining the Junior department of the Royal Academy of Music in 2007. In 2010 Daniel began his undergraduate Bmus(hons) studies at the Guildhall School of Music of Drama, here he studied initially with Hugh Seenan, and subsequently with Jeffery Bryant, David Pyatt, Richard Bissill, Jonathan Lipton, Chris Parkes, and Alec Frank-Gemmill, as well as Natural Horn studies with Roger Montgommery. In 2014 Daniel continued on the Guildhall Artitists Masters Orchestral Artistry Mmus program in association with the London Symphony Orchestra, which included performing in the Barbican centre side-by-side with the LSO conducted by Sir Simon Rattle. As a freelance orchestral horn player, Daniel works profesionally with groups including: BBC Concert Orchestra Dorset Opera Festival Ulster Orchestra Bournemouth Symphony Orchestra Royal Philharmonic Orchestra National Symphony Orchestra New English Concert Orchestra Southern Sinfonia The Little Orchestra The Son Project La Folia As well as performing, Daniel is an active teacher, and is Horn tutor at the Saffron Centre for Young Musicians, City of London School for Girls, and teacher of brass at Sherfield School, Hampshire. Daniel is also an active natural horn player, playing both the clasical hand horn and the baroque horn, as well as early valved instruments. He is a member of the Orchestra of the Age of Enlightenment Experience Scheme for 2017. In November 2013 Daniel performed Mozarts 3rd horn concerto with the Amade Players conducted by Nicholas Kramer. Daniel has played orchestrally with a variety of groups including the Dartington Baroque Orchestra, The Meridian Ensemble, Belsize Baroque, Essex Baroque Orchestra and the Jeune Orchestre de l'Abbaye. He has also played in side-by-side projects with the Academy of Ancient Music, the English Concert and Syrinx (wind ensemble).

We booked Daniel to perform in our Peterborough Sings! concert and were delighted by his playing. The whole orchestra sounded fantastic, and we wouldn't hesitate to book Daniel again.

It was a pleasure to have Daniel play with Camden Symphony Orchestra, and we'd have no hesitation in booking him again.