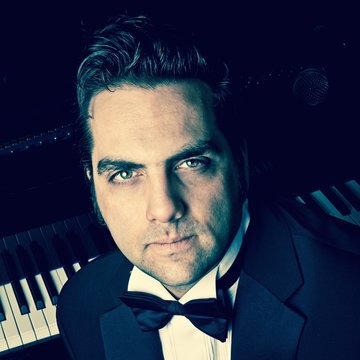 Daniel is a one-of-a-kind all rounder pianist, singer, guitarist, entertainer performing many styles and also in many languages.
3 of 5 photos
Pianist
London
Public liability insurance of £10 million
Verified profile

Daniel is a Pianist Singer, Guitarist, Entertainer and Bandleader who performs many styles of music: Swing / Rock / Pop / Jazz / Soul / Opera / Musicals / Latin / World. Though London-born, Daniel has travelled and lived in many countries and sings in French, Italian, Spanish, Portuguese, Hebrew, Russian and German. Influences and Favourites include: Frank Sinatra, Billie Holiday, Elvis Presley, Stevie Wonder, Jeff Buckley, Joni Mitchell, Frankie Valli, Radiohead, Muse, Smiths, A-Ha, Chopin, Rachmaninov, Debussy, Puccini, Neil Diamond, Marvin Gaye, Tom Jones, James Brown, Miles Davis, John Coltrane, Dean Martin, Nat King Cole, Louis Armstrong, Nina Simone, Janis Joplin, Ray Charles, Alicia Keys, Elton John, Dr John, Oscar Peterson, Duke Ellington, Nirvana, Aretha Franklin, Sam Cooke, Edith Piaf, Jacques Brel, Andrea Bocelli, Luciano Pavarotti, Al Green, Amy Winehouse, Yasmin Levy, Maria de la Paz, Anthony and the Johnsons, Pavement, Smashing Pumpkins, Michael Jackson, Whitney Houston, Isaac Hayes, Percy Sledge, Shostakovich, Buena Vista Social Club, Ofra Haza, Pink Floyd, King Crimson, Led Zeppelin and last but not least The Doors and Jimi Hendrix As well as a Swing Singer Entertainer, Daniel performs and entertains in many ways: as a solo singer with backing tracks, or with small or large band, a solo pianist (instrumental / classical), pianist-singer, singalong pianist, songwriter, comedian, bandleader, Elvis Tribute Artist, rhythm guitarist, host, MC, DJ and soon – An Elton John Tribute! Though his first instrument was the guitar, Daniel developed a love for playing piano in his late teens and later in his late 20s started singing with piano. More recently, Daniel also sings without playing piano as singing standing up is easier and more engaging:) Background London-born Daniel Benisty is a singer entertainer as well as jazz pianist, guitarist, songwriter and musical director. After some training in classical guitar and piano in his teens, Daniel undertook a postgraduate Jazz course at EJMA whilst living in Lausanne in his 20s. After travelling extensively and living abroad in Switzerland, France, Germany, Spain and USA for 12 years, Daniel re-emerged on the London scene in the early 2010s and has taken his performances to Music Festivals, Private Parties, Corporate Events, Weddings and Songwriting Showcases. Fresh from appearances at Bestival 2015 on the Isle Of Wight, Daniel continues his residencies and performances in London either solo or with his Jazz band. Most weekends, Daniel is singing, or band-leading at private events. Enjoying occasional invitations to perform in Musical Theatre, Daniel recently took a lead role as the Italian Tenor Tito Merelli in a Players2 Production of “Lend Me a Tenor” to fantastic critical acclaim, and will be adding more shows and variety to his portfolio in 2016/17. Songwriting Whilst living in Switzerland, Daniel co-wrote an album with Muriel Dubuis (Head of Vocals at Montreux Jazz Festival and Montreux Jazz School) and collaborated with the late David Richards (David Bowie, Queen) and Francois Planson (Theatre de Vidy). Collaborating in the UK with Jordan Brown and James Bacon, Daniel plans to release his first full-length album in 2016. Among his most enduring influences are Freddy Mercury, Elvis Presley and Jeff Buckley and indeed Daniel has either performed at, hosted, organised or musically directed Tribute Shows to each of these artists, in London, Paris, Frankfurt, Geneva, on Cruise Ships and all over the UK. A lover of live music and always searching for new talent, Daniel currently hosts and promotes two live music events and songwriting showcases in Central London. Entertainment A true eclectic with a taste for a dozen rhythms and languages, Daniel is an artist of unusual depth and breadth, who enjoys making events as interactive as possible, either by taking requests, or inviting people up to sing with him at the piano. As Musical Director of Caffe Concerto and past resident performer at the Ritz Club, RAC, New Players Theatre among other London venues, Daniel has accumulated a huge network of highly talented musicians and singers. Whether its a solo performance, a duo, trio or 12-piece band, Daniel has the experience and expertise to arrange the music and entertainment for a host of occasions. As well as making guest appearances as singer, musical director, actor, presenter or pianist at special events, Daniel is the bandleader of 2 bands: Soul Plated and the London Swing and Soul Band.

Hyde Park (altho it was actually with a guitar, performing original rock music) in front of a very large crowd Currently performing regularly at The Ivy in Chelsea which has alot of famous clientele.

As long as its a change of around one hour, it wont matter. If the change is significantly different, it may effect another event or arrangement, so it may incur a cost, but not necessarily.

Yes. If you require extended DJ service before and after, the charge would be £150 for 3 hours.

only 30 minutes for a solo act.

Yes. If they are new songs I have never heard of before then there will be a charge of £100 but I know alot of songs so its unlikely I will feel the need to charge this (only if they are really obscure)

With great talent and delightful charm, Daniel made our small family Christmas party a great success. It was a real privilege to have him perform for us.!

Fantastic! Really put on a great show and was loved by all

MB
Matthew B
4 years ago

Daniel was absolutely fantastic and entertained us throughout the Evening with a variety of repertoires. If you want to have lots of fun then you will not get anyone better.

Hi Daniel, Gaby, Harrison and the rest of the incredible band, We just wanted to say a HUGE thank you for performing at our wedding!!! You are honestly the best wedding band we have ever seen!!!! Everyone has been raving about you ever since! I am already trying to get you lined up for my friend's wedding ☺️thank you for taking the time to prepare with Lizzie for our first dance and for performing The Seed with Alex ☺️☺️☺️ Adrian was so chuffed that you reserved Blue Train until he was there. He was also so grateful to Harrison for twinkling away when there was no obligation to and finally to all of you guys for genuinely looking like you had a great time too. We will definitely be coming to see you guys play live in the future! Thanks so much again, Emma and Adrian

RACHEL CAMPBELL – WEDDING AT HOME HOUSE SEPT 2014 “Hi Daniel, Just a quick note to express my sincere thanks for helping to create a BEAUTIFUL wedding evening thanks to you and your band 🙂 The ceremony songs were spectacular and the dinner set was just perfect. Many thanks again xo”