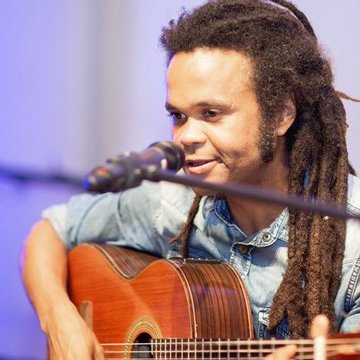 Dabs is a Cardiff based musician from London. A songwriter, guitarist and loop artist in his own rights Dabs fronts ska, reggae band New Town Kings and has played venues and festivals across the UK, Germany, France, Holland, Croatia, Czech Republic, Austria and Switzerland. Their DIY ethic and extensive touring schedule has seen them perform at Boomtown Fair, Secret Garden Party, The Electric Ballroom, Nottingham Rock City, The HMV Forum Cardiff Tramshed and a whole host more. Previous releases include ska stomper ‘Luna Rosa’, featuring sound system veteran YT, and reggae anthem ‘BurnBabylon’, featuring reggae legend Sylford Walker recorded with Grammy nominated producer Daniel Boyle (Max Romeo/Lee Scratch Perry). Their fresh approach has gained attention and received airplay from BBC 1Xtra’s reggae hotshot David Rodigan, and led to features on Fred Perry Subculture, WorldAReggae and Punktastic. “Hey, New Town Kings, I like what you’re doing. You’re doing good!” – Toots Hibbert (Toots and the Maytals) “New Town Kings are great crowd pleasers and are made to play live shows” – Colin Murray, Radio 1. Brought up on the fringes of London on reggae, motown, hip hop and RnB, Dabs went on to live in 7 countries collecting music and stories, language and rhythms. A proficient bossa nova guitarist with a good grasp of various latin rhythms and languages, Dabs sings jazz, blues and soul as comftably as he does hip hop and grime. His cover sets range through a multitude of genres. Pop, rock, party classics, background jazz/bossa nova, soul and motown using a loop pedal for harmony and bass he prides himself on appreciating the entire sphere of musical connection. As such he is one of the top booked artists nationwide on the Encoremusicians booking platform and has performed countless festivals, tours, venues, pubs, restaurants, weddings over a 20 year career spanning the globe. Since landing in Cardiff Dabs has been a regular on the pub and bar circuit in Cardiff, Swansea and Newport and worked with various organisations such as Black history Wales, Race council Cymru and the Windrush elders council. Through this work with NGOs he recently collaborated with several young Welsh artists on a song to support the NHS which featured on Heno on C4 Wales and on the ITV evening news. A veteran of 100 weddings and over 1000 shows Dabs repertoire caters for most musical tastes.

I’m totally flexible in the event of unexpected changes. In a nutshell let me know as early as possible if you need to change dates or times and provided I have no attachments the bookings I’m happy to accommodate.

I’m happy to DJ between sets and can bring a full sound system, mix desk and the like for between £100-£300 depending on how long is required. I actually run several live/DJ nights and get really really good feedback.

Ideally I like to be set up an hour ahead of performance time. Am happy to provide a free playlist to help create the desired atmosphere.

I’m totally open to discussion regarding setlist and always happy to take requests. Client satisfaction is really my motivating factor here so I always appreciate a more detailed gig spec. Once booked I’m inclined to study for every show so feel free to get them requests in early and within reason I’m happy to learn them free of charge.

Yes, I’ve a variety of PA options depending on the gig.

I will always happily learn ceremony and first dance songs for your wedding free of charge. I’ll even send you a Demo before you book (just shortlist me and I’ll get you a video sent over the next day)

Standard Prices
All prices include:PA hire
NEW!Virtual services
Personalised Music Message
Book me to create a unique music video for you to send to a friend as a gift. This could be a birthday message, first dance song for a wedding anniversary, or just your friend's favourite song to cheer them up.
£15

5 out of 5
29 verified reviews
Satisfaction

Daniel was amazing! Feeling lucky to have had him play at our wedding.

PB
Phill B
3 months ago

Dabs is an absolute legend, he absolutely understood what we were trying to achieve and delivered above and beyond. We will be booking Dabs again for next year's festival and can't thank him enough.

Daniel was an amazing opening act for our festival. Although perfect for our afternoon slot he would be welcomed for any alternative venue and timing. Very friendly guy, good selection of songs, good with the crowd. Highly recommended

WC
Welsh I
4 years ago