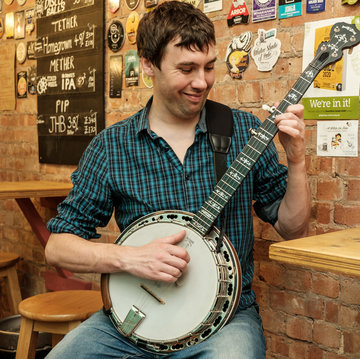 One of the UK's premier banjo players and a very accomplished singer and guitarist. Has been nominated for BBC Folk Musician of the Year.
3 of 4 photos
Banjo
Shrewsbury
Public liability insurance of £10 million

One of the UK's top banjo players and an accomplished singer and guitarist, Dan Walsh has been described as combining 'virtuoso playing and winning songwriting'. As well as six critically acclaimed albums and successful tours throughout the UK, USA, Canada, Australia, New Zealand and Europe, Dan has performed in the studio or on stage with such distinguished names as Imelda May, Joss Stone, Ward Thomas, Seth Lakeman and the Levellers. He is also a nominee for BBC Folk Awards Musician of the Year. Describing what Dan does is no easy task but at the heart of it is British, Irish and American folk music delivered with a healthy dose of funky grooves – all performed with his unique and dazzling take on clawhammer style banjo helping to challenge all preconceptions about the instrument. Add to all that poignant songs, astonishing musical departures and lively humour and the result is a truly memorable live show which has wowed audiences across the world from intimate seated rooms to huge dancing crowds in festival fields. Dan has performed at countless theatres, arts centres and festivals but also has extensive experience performing at all manner of functions such as weddings, wakes and parties. He began his career playing in pubs and thrived on the witty banter and lively atmosphere on such occasions! His repertoire is also very extensive - alongside his own material he has a wide range of numbers from folk, jazz, rock and pop and has frequently been booked by organisations such as Music In Hospitals and Live Music Now for his ability to respond to unexpected requests, seemingly plucking the words and music of songs he's never actually performed out of thin air! Finally, he is a firm believer in music and outreach and as a result performs extensively in nursing homes throughout the country. He plays concerts combining the best of well known material to stir memories with upbeat folk music to get feet tapping! Much of this work was done through the prestigious Live Music Now scheme which included a memorable residency at a Surrey care home which rekindled the musical and personal fire in former musician Glen Mason who was one of the residents. Dan’s song ‘The Song Always Stays’ was inspired by the experience and Live Music Now subsequently launched a campaign for music in care homes using the name of the song.

Popular covers:
You Can Call Me Al
The Joker
Stuck In The Middle With You
Brown Eyed Girl
Tears Of A Clown
Wonderwall
You've Got To Hide Your Love Away
Johnny B Goode
With A Little Help From My Friends
Jumpin' Jack Flash
Honky Tonk Women
Hard To Handle
Dock Of The Bay
No More Heroes
I Saw Her Standing There
The Cave
Forget You
Fat Bottom Girls
Breakfast At Tiffany's
Hotel California
Less well known covers...:
Don't Go
Meet Me On The Corner
Fog On The Tyne
Hammer and Nail
New Farming Scene
Bluegrass:
Sleep With One Eye Open
Foggy Mountain Breakdown
Shady Grove
Will The Circle Be Unbroken
Salt Creek
Old Joe Clarke
Red Haired Boy
Old Hometown
Roll In My Sweet Baby's Arms
Golden Oldies:
Loch Lomond
You Are My Sunshine
When Irish Eyes Are Smiling
Worried Man
Bring Me Sunshine
Jazz:
Fly Me To The Moon
Nearness Of You
Don't Get Around Much Anymore
Ain't Misbehavin'
Sunny Side Of The Street
Beyond The Sea
St Louis Blues
Irish:
Whiskey In The Jar
Black Velvet Band
The Suilin
Rocky Road To Dublin
Molly Malone
Irish Rover
Fields Of Athenry
Shamrock Shore
I Useta Lover (and most Saw Doctors material...)
Trouble With A Capital T (and most Horslips material...)
All manner of tune sets - jigs/reels/hornpipes etc
Own material:
Late Night Drive
Life On The Ground
Plan B
The Song Always Stays
Whiplash Reel
The Only Way To Go
Leave This Land
The Vaults
Out Of Here
Lost Rambler
Time To Stay
Hermit Of Gully Lake
Same But Different
What We Should Be Fighting For
Every Day Is A Better Day
Same Time Different Place
The Wiseman
Darkness Descends
Snow In March
Customer questions

Clients enjoy my instrumental skills and the fact I always try and keep my performances entertaining with plenty of humour! I try and keep the repertoire very varied too.

I have performed all over the world at festivals, theatres, pubs, bars, care homes, schools and even in a cave!

I played at London Roundhouse to thousands of people in a gig including Imelda May, Seasick Steve and Ward Thomas. I have also played on stage with Joss Stone, the Levellers and Seth Lakeman.

I always try to be flexible if possible and understand that event timings can change. Just get in touch and it should be easy enough to work out!

I'm not a DJ but I can easily run an ipod through the PA so that music continues to play and usually do this in any intervals. If I'm needed to stay longer to play more music, there will be an additional charge.

Ideally I like to have at least an hour to get set up before I'm due to start - as soon as the PA is ready which usually doesn't take long, I'm happy to stick on some background music!

If you've any requests feel free to ask this in advance and I'll see what I can do!

Yes, I bring everything needed.

If a song isn't included in our song list there may still be a chance we already know it. If there is a special song you'd like us to learn we are happy to do this for you. There is a fee of £30 for this service to take into account rehearsal times etc

Standard Prices
NEW!Virtual services
Zoom gig
I can play an hour's performance on Zoom for those who are uncomfortable or unable to attend 'real life' gigs!
£100

Dan Walsh had the whole place whooping and foot tapping with his energy and gutsy singing at our party. His thoughtful and amusing comments introduced pieces that varied from traditional songs with call and responses to his own incredibly skilful new works exploring world influences. He plays intelligently and sympathetically with fellow musicians, always creating more than the sum of the parts. His fingers move at a blur on both the banjo and the guitar - it’s exhilarating and extraordinary- what an amazing player and singer! The room was shouting for more and we will certainly take every opportunity to see this young, talented musician perform again and again!

What an amazing musician! Dan played at our wedding as we are long time fans - a brilliant set of his own material during the day was our personal highlight as we love his amazing folk tunes, own songs and AMAZING banjo playing. Then as if that wasn't enough he did us a covers set in the evening which everyone went crazy over. So entertaining and such a nice, professional guy.

Banjos in the UK
Banjos in Telford
Banjos in Newport
Banjos in Wolverhampton
Banjos in Stafford
Banjos in Dudley
Customer Service
Discover
Company
As seen on
© Encore Technologies, Ltd.
Crafted with bagels and in London