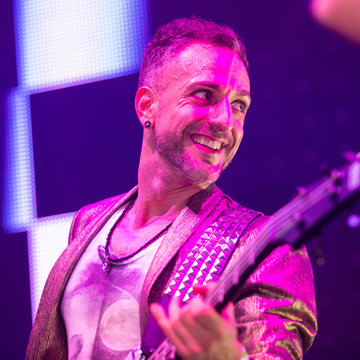 Check availability and get a free quote now - no commitment to book
From£1600
Watch & Listen
About Craig
Reviews
Home page
Craig Tyler
Like Craig?
Watch & Listen
1 of 1 video
The Talent Roundhouse 2018

As a Bassist, Vocalist, Band Leader and Agent Craig has entertained audiences around the globe.

Born in London, UK. Craig Tyler (aka Baggy) is a highly sought after Bassist, Vocalist and Frontman with an international profile, available for Live, Studio and TV performances. Craig has been consistently at the top of his profession for decades and possesses great improvisation skills on both Bass and Vocals covering a wide range of genres from Pop, Funk, Rock, Hip Hop and Soul. Craig or Baggy (originally nicknamed after the iconic madness Track ‘Baggy Trousers’) entered his musical career as a session bassist performing with some of the UK’s most renowned artists including Westlife and 80's icons Then Jericho. He took a step back In 2001, when Craig founded The Talent, an exciting collaboration between some of the best young instrumentalists of their generation, performing at high profile events and festivals across the globe. As a bassist, vocalist and band leader he has entertained audiences at sporting and corporate events close to his heart, including Royal Ascot, UK Cricket Finals, FA Cup Winners Party and the 21st World Scout Jamboree for his HRH the Duke of Cambridge and 50,000 Spectators from around the world. Additionally, The Talent have toured the U.K. Europe and Middle East extensively including the prestigious Burj Al Arab (Dubai), Hotel De Paris (Monaco), Emirates Palace (Abu Dhabi) and at a corporate level for 100's of well known global brands including Coca Cola, BP and the BBC performing at almost every music venue, concert hall and Arena on the way. His energy is currently focused into his busy production / entertainment agency The Talent Events although continues to be involved with new and exciting concepts and genres of music, as well as cultural and environmental projects. Music is and always will be his 1st love!

I just wanted to say thank you once again for being a great addition to My Birthday, I danced so much and the addition of the BANDEOKE was fantastic ! Seeing our wedding guests fill the dance floor & sing their hearts out is a fantastic memory I will never forget. i had and continue to have my guests comment about how great you were.

I wanted to thank you and the whole of the band who bought the whole night alive with their interaction with the crowd, especially encouraging us slightly more reluctant ones to give BANDEOKE a try we loved every minute of it !

Please pass our thanks to the band for yet again a fantastic evening at our company New Years Eve Ball, Oh what fun we all had , such a great addition to our event to have Bandeoke included !

Where do I start, Thankyou, Thankyou, Thankyou! The Gifted were amazing from first contact until the last note. You played all of our favourite songs and we’re so accommodating with our requests. I won’t hesitate to recommend you

I was a little concerned making my booking as I not heard you live, but my concerns were quickly removed as soon as you started singing, simply splendid !

Fabulous afternoon spent celebrating my wife's birthday, the band we had booked really put the finishing touches on it, the choices of songs flowed beautifully

Festival Kings had everyone on the dancefloor. Happy faces everywhere, amazing entertainment

All our guests of all ages really enjoyed Festival Kings performance, thank you

Exceptional musicians, great fun and incredibly nice guys to boot. The Gifted were the highlight of our wedding without a doubt.

Festival Kings exceeded our expectations, would not hesitate to book again

I booked Superbeat for my wife's 30th birthday party as a surprise , she was totally blown away as she had been to a friends wedding and loved them!

Verified
Amanda B, 3 years ago

Acoustic Duo were just what we had imagined, great voices, great fellas, who delivered a beautiful array of songs ,thank you !

As soon as the music started I knew we were in for a great night, thank you, the band were amazing

A big Thank you , it was a great afternoons entertainment, we cant wait till the next time

Massive thanks to all the band for such a splendid performance at our annual company event, everyone had greta fun !

Having already witnessed how amazing you were at a previous event I knew you were what we were looking for for our annual Awards Ceremony and oh boy you just as fabulous, see you again next year !

Never have we had such great feedback from our customers who came to hear you play in our bar last week, this will be a repeat booking !!

Just back from my honeymoon and wanted to thank you for keeping everyone entertained, we are still hearing great comments about the band

Just wanted to thank the band for making our wedding anniversary party so special, thank you for taking the time to learn 'our song' it meant so much to us.

Motown Live are fantastic, loved the songs , right up my street, would book again

Perfect band for our perfect day, thank you !

Thank you to the band, wow what a Christmas Party we had, everyone on the dance floor !

Verified
Jasmine B, 3 years ago

You guys are so professional , even when we had to adjust our last minute timings you were happy to make it all work out brilliantly, thank you.

Please could you pass my thanks to The Gifted. Once again they were brilliant and everyone danced all night.

Superbeat as the name suggests they are SUPER

Such energy and so talented