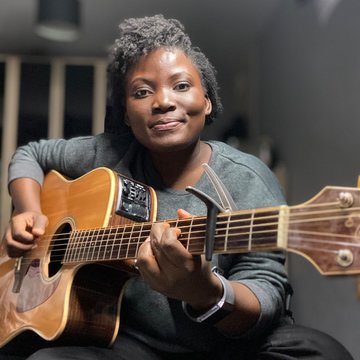 Ogo is a dynamic musician with passion to draw people into her performance.
3 of 5 photos
Singing guitarist
London
Public liability insurance of £10 million
Verified profile

A seasoned dynamic singer and guitarist with passion to deliver beautiful melodies and words on every occasion. I also write and perform original songs.

Absolutely. This is a really popular request and I actually offer this service for free. If you'd like a DJ service via our PA after the final set until the venue closes, I provide this for an additional £100.

I usually set up about 30 minutes to 1 hour before the performance time.

Certainly! I am also open to afew song requests.

Yes, absolutely! I bring my own instrument to play acoustically. I also bring my P.A system upon request.

If a song isn't included in my song list there may still be a chance I already know it. If there is a special song you'd like me to learn we are happy to do this for you, if informed in advance.

My performances are usually perceived as beautiful, engaging and dynamic.

Standard Prices
All prices include:All prices include - PA equipment - 2 unique songs/special requests (depending on the timeframe before booking)
Packages
Wedding ceremony + Drinks reception + Dinner
- Music before the service begins, music during the signing of the register, and music as guests leave. - 2 x 45 min performances at the drinks reception. - 2 x 45 min performances as dinner is being served.
£400

I hired Ogo for my surprise wedding proposal and her angelic voice, presence, and positive attitude made our special day even more special. Ogo arrived early, coordinated with my photographer and sang the most beautiful songs for us. Would hire Ogo again in heartbeat! Thank you Ogo!!!!

We had a spectacular time. Thanks so so much Ogo you brought joy, warmth and much light. My Mum has not stopped talking about the evening or watching the videos. We were blown away. Thank You so much 💖💕❤️

Great! Ogo was awesome, a very talented individual who was a joy to work with. Anyone lucky enough to book Ogo will be extremely happy they did so!

Ogo's voice and style of singing is phenomenal. She was an excellent addition to our event and will be for any event that books her. I certainly will book again. Thanks Ogo!

Ogo was calm and very easy to work with. Her voice and guitar was really beautiful.