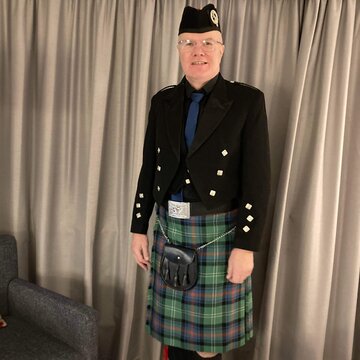 Colin was born in Glasgow, and moved to the North of England a number of years ago. He has been playing the pipes for over twenty five years in various bands, as a solo artist, and also as a session musician. His music has taken him all over the world, to places such as Israel, Australia, Italy, France, Germany, Belgium and Holland, to name a few. He has won several trophies and awards over the years, and played at some big venues around Europe. In the North of England, he has performed at the Sage Gateshead, St James's Park, Alnwick Castle, Hexham Queen's Hall, Sunderland Empire Theatre and Whitley Bay Playhouse. Colin has played at many weddings and celebrations, and has a wide repertoire of tunes. He is always willing to take on any new tune, and luckily for him, he can 'play by ear', so no tune is out of the question. He takes pride in his music, and will go out of his way to make your special day even more magical and atmospheric. Whether it be playing as guests arrive/emerge or playing smallpipes during the signing of the register.

Let me know and I should be able to accommodate you

Yes I have done previously so can do that

Standard Prices
NEW!Virtual services
Zoom bomb
I'll jump into your Zoom call and surprise your friends and colleagues with a unique song!
£160
Colin

5 out of 5
11 verified reviews
Satisfaction

AI
Anita I
5 days ago

Colin was brilliant. He made the Burns Night for us. Thanks Colin. See you next year. xx

You’re welcome, Anita great party! Unfortunately booked on the 25th for next year but happy to do another evening! Sorry!

Colin was fantastic, we booked him to play flower o Scotland as part of a tribute to Doddie Weir at our Charity Lunch. Highly recommend!

I was so honoured to be able to do it also. What a legend! Many thanks

We thoroughly enjoyed having Colin play at our wedding. Communication was perfect ensuring our day ran smoothly. Bagpipes played were so beautiful. Thank you so much Mr and Mrs Bryson

Thanks for that Danielle. It was a pleasure

Thanks for that, Thomas, it was a pleasure

Wedding - 'I was very impressed with Colin's calm handling of the situation and his timing in beginning to play just as they appeared at the church door. Michelle and Andy were surprised and pleased with Colin's piping and as I said earlier it really made their day and it was so special for me to be able to make such an unusual gift to them on their big day. The playing at the church and at the reception was exceptional but the 'piping in' as they came into the wedding breakfast was amazing!... thank you again for taking a late booking and for giving such great service, if anyone is looking for a 'piper' when they book a wedding with me I would be very happy to recommend you!'

Wedding - 'Hi Colin, I just wanted to pass these pics on to you and thank you for your brilliant performance on our amazing wedding day! You really did enhance our day, everybody thought you were great.