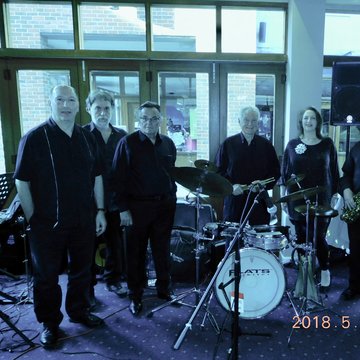 About The Colin Peters Set

The band Cloud Nine was set up by Colin Peters to provide a comprehensive alternative musical experience. All band members are sight readers and are capable of backing Cabaret. Colin has worked alongside Buddy Greco, Dick Haymes, Roy Orbison, Frankie Vaughan, Harry Secombe, Des O Connor, Ken Dodd, Les Dawson, Frankie Howard to name bur a few. The band can be expanded to suit the requirements of the venue. Colin started his musical career at a famous night club near Bristol backing such people as Jayne Mansfield, Jayne Russell as well as those mentioned above. Colin has been responsible for arranging and orchestrating many of the cabaret acts and has recorded at Pyne Studios at Marble Arch.

American Songbook, Ella Fitzgerald, Frank Sinatra, swing, jazz and pop. Covers.The More I See You.
We've Only Just Begun.
Close To You.
Masquerade
Goodbye To Love.
All My Loving
Something.
Beatles Medley.
Girl From Ipanaema.
Wave.
John Legend, All Of Me.
Arthurs Theme Christopher Cross.
Life On Mars. David Bowie.
Moonlight Sonata.
Bach's Prelude Number One.
Theme From Love Story.
A Man and a Woman.
If.
I Want to Make It With You.
Going Out of My Head.
Fly Me To The Moon.
Autumn Leaves.
Moon River.
Corcovado
Meditation.

Absolutely lovely afternoon listening to Cloud Nine playing at my husband’s birthday garden party (piano, drums, sax). All the guests thought they were great - they were punctual and totally self sufficient in setting up, played all afternoon with barely a break, played a beautiful selection of jazz, which just touched the mood of the event, were a pleasure to be with. Couldn’t recommend Cloud Nine highly enough: you won’t be disappointed.

Seen this band at my local Indian restaurant. Wow blew me away

Colin was playing with his band in hextable the Howard centre.