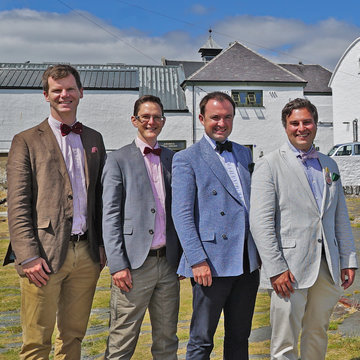 Woody Allen (tenor), Thomas Eyre (lead), Tom Rogers (baritone) and Johnny Shipley (bass) have spent the past eight years singing their brand of light-hearted and lyrical songs across the green and pleasant parts of the UK, with performances at The Big Feastival, and the Burford, Bath and Buxton Festivals, where they picked up a nomination for Best Vocal Performance. They've toured distilleries in Islay, but they’re a bit hazy about that. They've also crossed the Irish Sea several times to perform in Lisburn, Strangford Lough and Stormont. They sing folk songs, philosophical songs, silly songs, serious songs, saucy songs and sad songs. It's a real gallimaufry of music.

We're very serious about delivering slick, stylish a capella singing. But we don't take ourselves too seriously!

We've performed in some very unusual places, including: a distillery (Ardbeg) a parliament (Stormont) a gentleman's club (The Lansdowne) a rowing club (Dorney Lake) a golf club (Sunningdale) an art gallery (The Green Man)

Performing to a packed audience at the Belfast Parliament (Stormont) was a great occasion! We raised a lot of money for charity that night.

We try our best to be flexible so that your event can run as smoothly as possible. The best thing to do if there is an issue is to get in touch with us.

We are an a capella group - it's just our four unaccompanied voices - so we do not provide any equipment.

We are an a capella group - it's just our four unaccompanied voices - so we do not provide any equipment. That means we don't need much time to prepare. We like to have a little time in the space to warm up and refine our performance.

We sing close harmony and that requires us to sing close together. Occasionally we can break out and roam if there is a solo number.

Our set lists have been honed over time from our countless performances and learning what works best to ensure guests enjoy an amazing time. That being said, we are of course open to having a chat to make sure we find what works for your event.

We provide no technical equipment as we are an a capella group - four unaccompanied voices.

Standard Prices
4 musicians
All prices include:Four singers in bow ties.
Packages
Wedding ceremony4 musicians
This includes music before the service begins, music during the signing of the register, and music as guests leave.
£1500

I was lucky enough to have the Barbershop Quartet (Close Enough) perform at Finnebrogue in August. It was a superb evening, with a wonderful variety of songs old and new which delighted a full house. The group is talented and immensely entertaining. There are already many calls for a return.

We much enjoyed your performance in the garden here at Grey Abbey when we first met you all. Musically Bill and I thought you were excellent, as did our invited audience.

Verified
Graham A, 2 years ago

It was a pure delight to hear Close Enough - whose appeal satisfied musical and non musical tastes. Before long the audience were tapping along with the singers. 4 different voices blending into a wonderful togetherness as befitting their name. They were exciting and vibrant; serious and humorous. We would just love to hear them again.

We loved your visit and were very happy to host you on a gorgeous day in the summer of 2018. It was a beautiful sunny Islay day at Ardbeg and due to the sunshine we decided to move the quartet outside…. Our visitors enjoyed the beautiful set and enjoyed scallops and lobster whilst watching! The boys thoroughly enjoyed the gig and we rewarded you with a few drams of Ardbeg single malt. Should the opportunity arise once more we would love to have you back – come rain or shine!

Close Enough performed at Bailiffscourt West Sussex on April 15th 2018 and were a great success.

I hired Close Enough to play at the Lansdowne Club’s end of season squash dinner. Close Enough performed a highly entertaining repertoire to about 70 people which they pulled off both as background music and also as headliners. I’d highly recommend hiring Close Enough for a high calibre barbershop quartet that elevates any social occasion.

A really big thank you for your tremendous and totally positive and professional contribution at our Soiree last night. I am absolutely genuine when I say that you chaps set the scene for a truly great evening and ‘Close Enough’ should be extremely proud of an excellent set of vocal and visual performances! I loved all your items, but must say your setting of God Save the Queen was icing on an already very tasty cake! Macmillan Cancer Support will benefit very greatly from last night and THANK you all for helping us to raise funds in such an happy atmosphere.

We very much enjoyed your fringe festival performance here in 2017 (as did our customers and visitors). Great voices and a lovely energetic vibe. One of our favourite ever Bookshop events - We'd love to have you here again sometime!

Barbershop quartets in the UK
A cappella groups in the UK