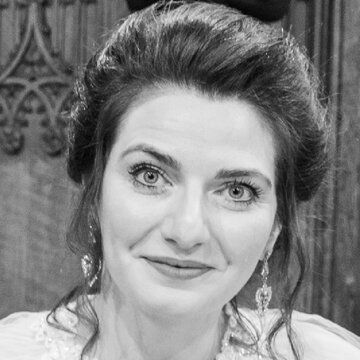 Christina Jones began singing at the age of 8 at Holy Trinity Church, Ossett, and then became a member of Wakefield Cathedral Choir until the age of 17. During her time at the Cathedral she participated in the choir tour to Sweden and also sang in Westminster Abbey, alongside other prestigious venues. In the Cathedral Choir she was a frequent soloist and featured in a duet on the CD ‘Ikon of Saint Hilda’. She has also sung on BBC’s “Songs Of Praise” and performed a live solo on BBC One’s “Christmas is Coming”. After her Associated Board of the Royal Schools of Music pass with distinction at grade 8, Christina attended an Eton College Choral Course in 2001. Multi-talented, whilst at school she played the piano at the Royal Festival Hall and became a finalist in both a public speaking contest and debating competition. Christina attended the University of Sheffield, graduating in 2008 with an honours degree in Law. She has since, however, pleaded guilty to the charge that music is her passion. She has performed regularly as a soloist for The Yorkshire Philharmonic Choir and Harrogate Choral Society, impressing other soloists of truly international renown with her assured performances and can be heard on several compact discs recorded with Yorkshire based choirs. Her solo works include Jenkins Requiem, Durufle Requiem, Handel Messiah, Jenkins The Peacemakers, Faure Requiem , Schubert Mass in B Flat, and her Operatic roles have included Sophia in Edward German Tom Jones, Hippolyta in Britten Midsummer Night’s Dream, and most recently the role of Katherine in the world Premier of the new opera by Michael Wolters Ava’s Wedding. The future is therefore bright for Christina Jones – a local name to watch out for on the national and international stage. She is presently studying under Anne Dawson at Birmingham Conservatoire where she is completing her Post Graduate studies and receives coaching from Stephen Barlow, Philip White, and Robin Bowman among others. Christina is becoming ever more popular as a soloist, delighting audiences in recital series in the UK with her wide ranging repertoire.

Ava Maria - Schubert
Pie Jesu - Andrew Lloyd Webber
O Mio Babbino Caro- Puccini
Pie Jesu - Faure
In Domine Deus - Vivaldi Gloria
Deh Vieni - Mozart The Marriage of Figaro
Ave Maria - Cuccini
Ave Maria - Gounod
Piangero La Sorte Mia - Handel
Song of the Angel - Taverner
I Feel Pretty - West Side Story
I Could Have Danced All Night - My fair Lady Tonight
If I Loved You - Carousel
Memory - Cats
Wishing You Were Somehow Here Again - Andrew Lloyd Webber
Think of Me - Phantom of the Opera
Somewhere Over The Rainbow - Wizard of Oz
I dreamed a dream - Les Mis
Panis Angelicus - Franck
All hymns available
Cross over rep:
The Power Of Love (Jennifer Rush/Celine
Dion)
I Will Always Love You
Nessun Dorma
Time To Say Goodbye
The power of love - Frankie goes to Hollywood
Songbird
From this moment
When I Fall In Love
Over The Rainbow
Bring Him Home

Thank you so much. Your voice is beautiful Christina and it really made a difference to Dads funeral. I passed your details on to a friend