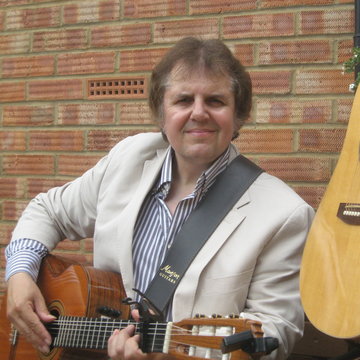 I have been a guitar/music teacher for a number of years and a published composer and folk singer-songwriter, writing/ producing/ performing on albums including 'Dr Syn & The Scarecrow', 'Shackleton's Endurance' and 'His Stories' playing in a number of pop, rock, folk, theatre pit bands, ensembles, duos (Currently 'Los Carreteros') and solo acts. (Bachelor of Music and Associate of The London College of Music). More recently I have been playing more solo instrumentals on Spanish guitar, including a performance at a wedding ceremony at Malcesine Castle, Lake Garda, Italy. I enjoy incorporating Spanish/Flamenco style playing with 'Los Carreteros' and folk sets and would like to do more of this in a solo instrumental guitar setting.

Recuerdos de la Alhambra, Adelita by Francisco Tarrega
Spring, Winter by Antonio Vivaldi
As Time Goes By by Herman Hupfield
Nuages, Minor Swing by Django Reinhardt
The Look of Love by Burt Bacharach
All My Loving, Something, And I Love Her, Michelle, Day In A Life, Here Comes The Sun, She's Leaving Home, Yesterday, Lucy In The Sky by The Beatles
Your Song by Elton John
Jesu Joy of Man's Desiring, Sheep May Safely Graze by JS Bach
Pacabel's Canon
Make You Feel My Love by Bob Dylan (Adele)
Clair de Lune by Claude Debussy
Cavatina by Stanley Myers (John Williams)
Gymnopedie No.1 by Erik Satie
Romance (Anon.)
Romeo and Juliet by Nino Rota
Rain Song, Stairway To Heaven by Led Zeppelin
Wedding March by Felix Mendelssohn
Angels by Robbie Williams and Guy Chambers
Nature Boy by Eden Ahbez (Nat King Cole)
Fields of Gold, Fragile by Sting
Air and Hornpipe by GF Handel
Prince of Denmark's March, Trumpet Tune by Jeremiah Clarke
Flamenco selection
Sevilla by Isaac Albeniz
Loving You by Minnie Riperton and Richard Rudolph
Mr Blue Sky by Jeff Lynne (ELO)
Rather Be, Symphony by Clean Bandit
The Nicola Jayne March by Chris Lea
Albatross by Fleetwood Mac
America by Bernstein
Bohemian Rhapsody by Queen
Chicatita by ABBA
Cry Me A River by Arthur Hamilton (Julie London and Barnie Kessel)
Guitar Man by Bread
Hotel California by the Eagles
If You Go Away by Jacques Brel
I Got Rhythm, Summertime by George Gershwin
Killing Me Softly by Charles Fox (Roberta Flack)
Nights In White Satin by The Moody Blues
Romeo and Juliet, Private Investigations by Dire Straits
Samba Pati by Santana
Scarborough Fair trad.arr by Simon and Garfunkel
Someone Like You, Rolling In The Deep, Skyfall by Adele
Spectre/The Writing's On The Wall by Sam Smith
Life On Mars, Space Oddity by David Bowie
Stardust/Rule The World by Take That
Wish You Were Here by Pink Floyd
Without You by Bad Finger (Harry Nilsson)

Standard Prices
All prices include:Guitar amplification as required. Choice of up to three specific numbers to be performed.

Chris is one of the hosts at my local acoustic music club, The Ark Club at New Ash Green. He is always very organised and brings his talent to the club with a range of instruments and different styles of music that he plays and sings. If called upon, he will join and back other guitarists on guitar or mandolin. As part of a duo he entertains in restaurants and Spanish bars with his superb Flamenco guitar playing. Chris would be an excellent choice as a solo guitarist for restaurants and weddings.

Verified
Lucy B, 2 years ago

We hired Chris Lea to play the guitar during our wedding ceremony in Lake Garda, Italy. He was absolutely amazing - he really listened to what we wanted and nothing was too much trouble. He had great suggestions regarding style of music and we even walked down the aisle to one of his original wedding marches, which was beautiful. From classic, to flamenco and finishing up with a guitarist rendition of Pharrell William's 'Happy', we can safely say the quality and high standard of Chris's music really did tick all the boxes and made our ceremony even more special. The music wasn't just appreciated by us, as we had so many wonderful compliments from our guests too! We can't thank you enough for making our wedding ceremony extra special, we will always remember it 😊 kind regards, Lucy and Graeme Barnes